Rye is a type of grain, and is a staple of the human diet. 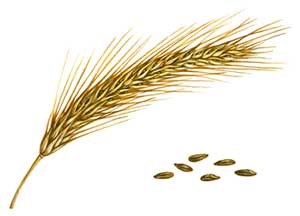 Among its less interesting uses is as a source of flour, for use in marginally beneficial products such as bread, or large and vaguely phallic paper-maché sculptures made by fine art students. It is also often used as fodder to fatten livestock, so they may in turn fatten you.

However, rye's most valuable application is in the production of liquor, including rye beer, whiskey, and vodka. It is in this form that, as a social lubricant, rye is truly able to promote the happiness, welfare, and propagation of the human species, to the fullest extent allowed by law.

Ingested in medium to large quantities, rye liquor can:

It is because of these, and other considerations that biologists rank rye third on the list of requisites to human life, ranking above food, but below water and oxygen.