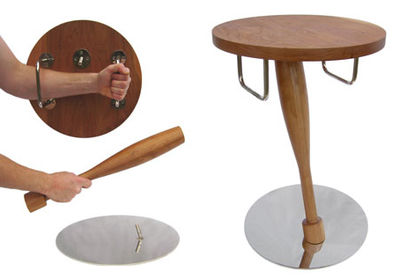 Unwritten rule of the game: Gruntled gets to use weapons.

The Illogicopedia Card Game is unique to card games in thousands of ways, but foremost perhaps is the fact that the game is played entirely without cards. Other features include the rules changing for every game, an itchy dog must be present during at least three quarters of the games duration, Christmas caroling is forbidden, Paris Hilton may never be allowed to play, players must be inebriated, high or insane, no eating live monkey during play and belching, or not belching, can accumulate points.

A minimum of 0 players selects the dealer by rock-paper-scissors. The loser of the last round is the dealer. The dealer then selects a banker, a Klingon and a hitching post. The hitching post just sits there, waiting for someone to tie a horse to him or her.

The banker then removes all the money on their person and puts it in a clothes dryer. The Klingon then slaps the banker across the left cheek and says something about their mom that makes no sense. The other players vote on whether or not the your mom reference makes sense, and the Klingon has acupuncture needles applied, seven by each player except the hitching post, unless they have two or more horses tied to them at this point in the game. Then the hitching post drinks tequila until they can raise Madrid on a ham radio.

However, if the hitching post has any number of unicorns, pegasi, or alicorns attached to it, then the world's best basketball-playing robot monkey ear Slime Cube must be bought from Wal-Mart. It must slap the Klingon 5,318,008 times. The banker finds Waldo, who will be having sex with Carmen Sandiego, and steals him, unless one of the unicorns tied to the hitching post is Charlie, in which case the Klingon finds and steals Carmen Sandiego, who will be having sex with either one dinosaur or two dinosaurs. That is, unless the dinosaur is either a Triceratops, a Brachiosaurus, or an Illogisaurus, in which case Charlie must be forced to sext and/or have sex and/or Sexual Intercourse with the dinosaur.

The least irritable player then throws two dice into the dryer with the money and runs it on low until someone says something about the racket. Angels will begin to appear, one by one, in the playing space. First player to spot an angel yells, "Dinty Moore beef stew!", then takes 30 milligrams of valium and is considered out of play until they regain consciousness.

The remaining players go on about their lives as though nothing weird is going on for 6 days. The itchy dog is given prednisone, and all players who come in contact with the dog must talk baby talk to it. Mandatory phrases include, "Aw, isn't 'em my sweet puppy wuppy?", and "Mummy/Daddy loves his/her sweet baby girl/boy, doesn't mummy/daddy?"[1]

On the seventh day, all players except the banker gather at a fast food restaurant for lunch, then bring some take out for the banker at their home. Those without an internet connection may abstain from smoking 6 cigarettes. Otherwise, the dealer asks the banker if they'd like to step outside and smoke eight cigarettes. The rest wait, or if the banker does not smoke, players each get a beverage of their choosing and sit on the floor in a circle.

The dealer then hands out alcohol and/or drugs of choice to those who want them. Players who abstain and are not insane then leave the game. A camera is then set up to record this portion of the game. Those left begin to discuss the meaning of life until conversation peters out, violence sets in or everybody passes out.

This recording is then uploaded to Illogicopedia and any news outlet who will have it.