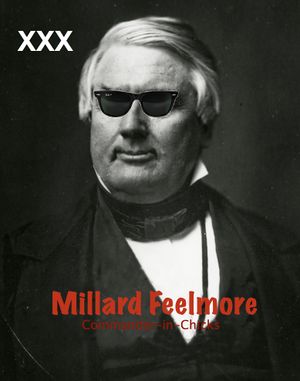 Millard Feelmore is a 2008 adult film based on the life of Millard Fillmore, the thirteenth president of the United States. It stars "Dirty" Jimmy Hernandez as Millard Feelmore, a President who handles his and the nation's affairs.

Millard Feelmore starts the film in the Oval Office of the White House, doing presidential things. Immediately, he and an aide named Marcia (portrayed by porn-veteran, Boner Lisa) enters with some important papers. The papers inform Feelmore that in order to "save the great nation of America," Marcia and Feelmore must have sex right there in the Oval Office. Feeling no hesitation, the two immediately engage in aggressive intercourse.

Finally, the four lay on the ground of the Oval Office, naked and sweaty, covered in bodily fluids, and staring at the ceiling. They make comments on the sexual experience and rest. Then, Feelmore gets up, puts his clothes back on, and walks outside, where there is a motorcycle waiting. He gets on the back of it, and calls out to his wife, his mistress, and Abraham Lincoln that he "hears there are some bad bitches in New York," and rides away. The screen then fades to black.

The atmosphere on the set was described as upbeat, as nearly everyone there really wanted to be there. It was considered a "cushy job" in the pornography business. The one anomaly on the set was the presence of Daniel Day-Lewis, who, at the time, was a two-time Academy Award-winning actor. When asked why he, a critically acclaimed actor, wanted to be in a pornography, he merely stated that he was researching the character of Abraham Lincoln for a future role, and it was important for him to know, in his method acting, how exactly the character of Abraham Lincoln engaged in hot, steamy, four-way sex.

“Don't make me send the troops into your vagina.”

“Mr. President, I've been a bad girl. You should sign an executive order against me.”

“You're my sex slave--because slavery is still legal.”

“You know what they say about big top hats?”