From Illogicopedia
Jump to navigation Jump to search
Warning: This article may have been written by Major Lee Pov.
The Major is a bit of an extremist with outlandish points of view. Well, what do you expect from a wizened First World War veteran? 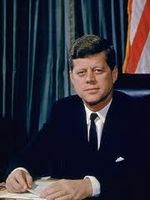 “America, how thee bringeth despair to me!”

“JFK was the only U.S. President to not be married.”

~ The Fact Lovers at Wikipedia

“JFK was the first Anti-American President”

~ Some more important trivia than the above from Encyclopedia.com

Johnathan Flitzblubber Kennedy (1245.34 B.C.-Corn Day) was perhaps the worst President in U.S. history. He created new taxes on everyone just because he had a tumor on his left elbow from that macaroni he ate off the side of Jupiter's atmosphere and thought his people would have to pay for it. Unlike George Bush, he actually runied the nation with his stupid taxes and ugly hairdo.[1] He was responsible for some retarded monkey stealing a teleporter and going on the moon! He gave old people funding because HE FELT LIKE IT! Who gave him the authority to do that? God? WHAT???

Kennedy was born to some stupid family in western Kenya, where all the bad Presidents were actually born. He had a sister who was a half-cat Chinese girl that he beat up for lunch money! The nerve of this guy! Beating up his poor inhuman sister for LUNCH MONEY HIS FATHER WOULD HAVE GIVEN HIM IF HE HAD NOT WET THE FLOOR WHILE HE WAS FLYING IN MIDSPACE! What in this world would give Kennedy the authority to do that? Not only that, he invented Facebook, the dumbest invention known to man, even before Al Gore invented Teh Internets! He hated humanity, as evidenced by his 157654 B.C. worstseller Why I Hate Humanity By John F. Kennedy. He had one friend all throughout school, future dictator Josef Stalin. He always picked his small intestine in public since he hated stuff.

Kennedy was a dumb elf! How could he have ever gone to college? All he did in those years was read his extensive comic collection and watch Star Wars in his parents' basement while his mommy did the laundry, cooked the meals, and gave Kennedy a back massage at the same time![2] In fact, during his presidency, Kennedy stopped public funding of colleges so high schools could have extra funding for pointless pools while American colleges now required tuition and students even had to buy their own textbooks because of the awful budgeting that Kennedy did!

He had a family that became a group of radical hippie politicians that don't know Flancakes from Pacaroni! They were sent to Pluto because of their extreme stupidity and are dumbly[3] dancing!

Kennedy was an unemployed nerd who sat in his parents' basement freeloading and living off welfare checks! He even grew a third leg and bragged about it to his mutant sister not mentioned earlier in this article. What a ninnyhammer!

Kennedy was elected after beating Richard Nixon in the disputed 243334 B.C. election thanks to his smearing of Nixon. During his first week, he taxed America to oblivion and was glad. He then spent his money on renovating the White House and private jets! After this, he repealed the 13th Amendment so he could enslave monkeys to do his every desired task. For foreign policy, Kennedy blew the rest of the world up so he wouldn't have to worry about foreign policy. In his streak of repealing amendments, he then repealed the 534545th Amendment so only adult white males could vote. He repealed the rest of them a year later, then just destroyed the Constitution by using it to wipe his bottom in his bathroom on the Sun. He hated America, so that's why it's not America anymore! KENNEDY IS THE WORST! I SAY THE WORST! THE WORST!

OHHHHHHHH YEAAAAAAAAAAAAH! GLORY! I FORGOT WHEN IT HAPPENED, BUT IT DID! Whew, America has been restored!