Hello to you. Although I am an admin, I know very little about anything, but especially anything about the answer to your question. I will relay the question to Demigoddess Athyria, who is a Wikian. I personally would love yet another language for Illogicopedia, in order to spread the illogic to more of the world. I have taken up the discussion here, so please go there to discuss. Also, please register as a user here so we can more easily contact you. Thanks.

Sometimes, it takes a monkey, and a hard monkey is good to find.

Yup, monkeys They used to use gibbons for the occasional gibbous moon, until some were-gibbons got mixed up in shipping in 1988. Several technicians and Illogicopedia users were mauled during the ensuing melee on the loading dock, but security managed to round up all 7 were-apes without further incident. They were stored in Schrodinger's box until spaces could be found in Skinner boxes. The decision to use monkeys was due to the fact that they have tails, unlike apes. Even were-monkeys are more easily caught since the tails make excellent handles. Despite water-boarding, the were-apes remained uncooperative.

Could you plz add the user rename settings to my preferences? I'm tired of the name "Sophia". --(BKYE) Sophia, The Resident of Uncyclopedia Delty (babble)

If you had recently been thinking "wat are these newbs doing makingz stuffs about this bro called bawb teh shtonegui" or something similar, Bob the Stoneguy is a angel statue who will come for you at 12:30 at night, although he isn't to careful. One sign of him is a freaking burst of giant Metallica music into your room, and he'll usually be holding a radio. This guy has this epic Pokerface on him.

So, if you tend to sleep a lot and enjoy your dreams, it'll be hard not to say something like "WAT R U DOING IN MY ROOM CAN YOU READ ITS TWELVE THIRTY AND I'M NOT AT A CONCERT WAT IS THIS "BWAAAAAAAAAAAAAAAAAAAHHHHHHHHHHHHHH" PLAYING????" This mistake has lead to many deaths. Say: "Hai Bab" Then start dancing to his Metallica music. He'll leave

Q: Why does this make no sense? A: It's illogicopedia. No moar questions

Actually, no. What we're wondering is, "wat r deez noobz doing goin to ilogicopedia and not making an account with them."

Are you asking why anon IPs aren't all registering, or why we don't have more nubes?

Alot of you know about the main page. But, There was a goof made by a Illogicopedian. That error comes from a forum box that says "Talk about stuff and things". and that error says "</forum>namespace=Forumcategory=Allforumtopicsshownamespace=falseaddlasteditor=truehistorylink=truecount=12<forum\>[1]" So, that's why you need to fix it! Look at the image and fix the main page! DO IT PLEASE! --(BKYE) Sophia, The Resident of Uncyclopedia Delty (babble)

Oh, I suppose you think you're pretty clever, huh? Thought you would find something you weren't supposed to see yet? Well, it's not just Wackypedia. It's just Illogicopedia. Nothing since last time when some guy which is me edited Illogicopedia of the Month for the sake of it. Let's just emerge from the middle of nowhere and relax. :) --(AMB) (XAR) (BKYE) Sophia, The Resident Uncyclopedia Deity (talk) 20:52, 13 Arche 2016 (UTC)

Can some admin add the {{Feature15}} template to the main page?

Ohio weather is just another one of life's greatest mysteries, like, why is toilet paper white? Or, why are beavers so evil? I have no clue. It's just sunny one day and snowing the next. In summer.

Why is the front page all wonky looking?[edit]

It used to be kind of a disorganized mess with some stuff that almost fit together and was just a little truncated on the right where the alignment was off a bit, along with pictures of socks or something, and now suddenly it looks all different with a bunch of text and no socks.
What happened? Snarglefoop (talk) 04:27, 22 Jeremy 2017 (UTC)

What happened to the main page?

--The previous unsigned comment was left by Felis Lupis (talk), see the past frenzies page for posting time

I don't know. Perhaps it was carted off by bread.

Oh yes, that. It comes up randomly. It's been having this problem for ages.

I think you're on to something there, Snargly One. Indeed, Carl Jung himself coined the term to describe connected events with no discernible reason for their connection.

I dunno what to do about it, mamma! I replaced all my coding knowledge with scores from the teletext videprinter. Only thing I could say is that maybe something in the individual templates is causing the page to stretch beyond 100%. Anyone out there know wikicode? :P -- Hindleyak  Converse • ?blog • Click here! 20:05, 19 Yoon 2017 (UTC)

Your own is good. Anyway, sign your comments with four tildes ~~~~; this will automatically produce your name & the date.

--The previous unsigned comment was left by Pratyya Ghosh (talk), see the past frenzies page for posting time

can you go christmas with that logo, et cetera?

--The previous unsigned comment was left by Sophia (talk), see the past frenzies page for posting time

--The previous unsigned comment was left by Twoandtwoalwaysmakesafive (talk), see the past frenzies page for posting time

--The previous unsigned comment was left by Felis Lupis (talk), see the past frenzies page for posting time

If you want to see your sandalism again, bring 500,000 somalian pesos in small unmarked bills[edit]

OK so I failed completely to get a handle on why the main page is totally missing unless you're logged in.

And I tracked down the missing sandalism to the Vandalism template, which acts weird when it's stuck in a table with somebody else (or even itself). I didn't figure out what's wrong with the template -- replacing most of its code with stuff that made no reference to the width of the surrounding page didn't make a difference. If it's on the first row of a two-row table, its first cell decides it wants to be as wide as the entire second row, and sandalism goes off to nowhere-land.

HOWEVER I did find a workaround. It doesn't look quite right (sandalism's header and footer don't float properly) and, worse, it requires editing the main page, but it gets us into the ballpark again. Somebody with Main Page Power might want to bip it in there, since even if it's not perfect, it's a heckuva lot better than the messed up look we're currently sporting.

Where the main page says this:

change it to this:

--The previous unsigned comment was left by Snarglefoop (talk), see the past frenzies page for posting time

Athyria explained this. The page is cached (somewhere) and the cache is only refreshed when the page changes. So, if the cache gets a broken version stuck in it, the broken version will be seen instead of the "right" page.

For reasons which are too high for my limited understanding, this only affects users who are not logged in. So, when the hoipoloi get locked out of Illogicopedia by this gremlin, the fix is simple:

The change doesn't matter -- add a blank or something -- anything to trigger the stupid robot who caches it to pick up a fresh copy. Snarglefoop (talk) 20:41, 4 Farbleum 2018 (UTC)

So after spending lots of time getting nothing done I'm supposed to be getting done I did at least find the culprits for Sandalism having its width wonky and having no link to edit the template at the bottom. There is a general rule here:

Do not include fancy tables, nor templates that expand into tables containing all active user names, nor other wonky things in the Vandalism template.

In the upper right of the main page, where the featured image list should go, we're showing an error message from DPL.

The reason is DPL 3 is apparently too stupid to ignore whitespace.

If someone would go in and just undent the 'dpl' code block to the left margin it'll get rid of that error message.

I'm going to include a couple screen shots because I need to show this with whitespace preserved, and I can't get the wiki code to do that. 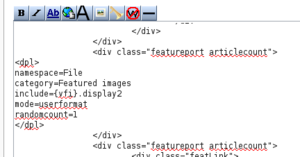 I realize this sounds cretinous and you probably can't believe it, but in a test copy of the main page it got rid of the stupid "no parameter option supplied for ' '" message -- and it makes sense. The error message is babbling about a parameter named blank, f'gosh sakes. Snarglefoop (talk) 23:24, 28 Arply 2018 (UTC)

How to eat with out your mouth[edit]

The first step is to fail.

The second step is to stop reading this.

The third step is to fail again.

The fourth step is to have a carrot.

The sixth step is to realise that I skipped step five.

The fifth step is to succeed.

The seventh step is to open a dog and cream the mail.

The seventh step is to listen.

The seventh step is to yes.

And finally the sixth step is to NOESYA.

Not Open Everyone 'S Healthy Eyeballs.

The first step is the sixth step except for the last step.

Do not step on the third steppes.

also since you're down here, why don't you friend me on discord? jackbugler#3592

In my opinion, we exist because of the amazing coincidences of mother nature. Our lives are all inextricably linked in some way, shape, or form. Our existence is based off of chance and inter-molecular gambling, hoping for the chance to finally win, and we picked...the short straw.

We were made the smartest creatures on planet earth,but not because of luck, as we said before, but because we were the craziest motherhuggers in the jungle. We have a core of pure, instinctual, murderous thought and need. We are the basis of madness. Almost all of us are mad, but the normal ones are the ones called mad. Apart from schizophrenics, of course, they're just scrambled.

But my point is, we re just beasts deep at heart. Dumbledore was wrong about the mirror of Erised. Our deepest, darkest desire is to maim, hurt, and kill.

sorry, had to let that out after the hell of the past 3 years.

now for a humorous thing, to make up for the really deep thing I just said up there lmao:

They can jump really high and dogs can't jump as high as them.

this is a cat.

These are hacks for club penguin

You can also use the hacks on club penguin rewritten.