I basically suck. I don't edit here very much. I'm on Uncyclopedia more. Like all Uncyclopedian's I edit Illogicopedia when I'm bored, I'd say when I'm drunk too but then I'd get horrible disapproving looks from this madwoman. I might possibly die in some horrible way as a result, which would result in you all being sad for 42 seconds.

Speaking of people that suck, have you seen THIS mad woman or THIS ONE. Basically Illogicopedia is one giant mad house for mad people. Anywho yeah I write articles, I have no featured ones because I suck at this. Amusing randomness is something I suck at, cynical sarcasm is something that I apparently excel at. Whoop-dee-fuckin'-doo.

I am from Australia. Australia rulez, except for bogans, bogans suck. Frosty is not a bogan simply because he doesn't like alcohol cheap alcohol, Football (If you are British and think I mean Soccer I will infect you with genetically enhanced Anthrax) and smoking, all of which are key staples of the bogan diet.

I also like switching between 1st person and 3rd person randomly. Frosty enjoys that a lot. 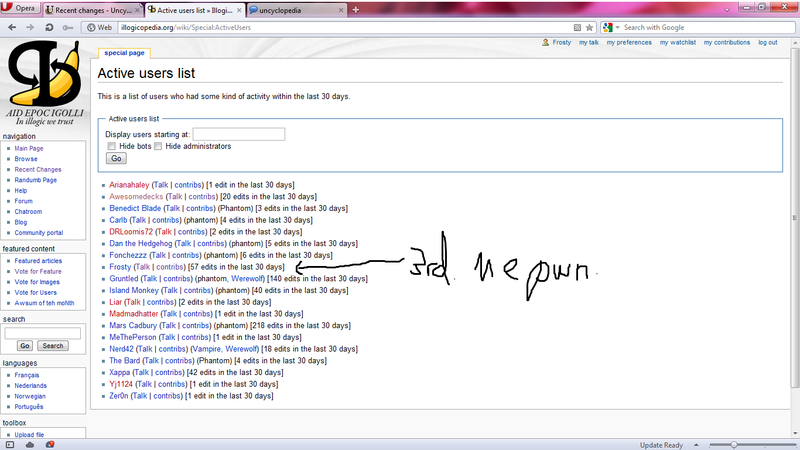 i am teh 3rd most active user 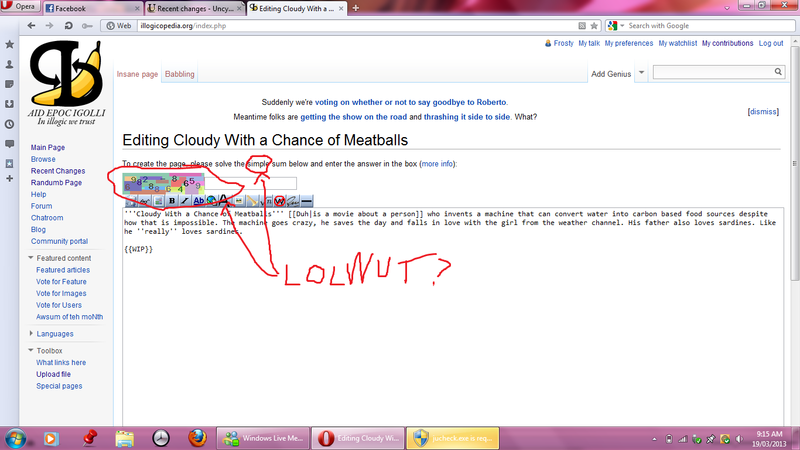 Yes I do write stuff for illogicopedia, it is many varied. Sometimes I spend 15 minutes writing a page because I probably saw something in a show or in an adventure to Sydney and I just go "OMG I HAVE TO WRITE SOMETHING". Other times I actually spend many days writing... They usually fail to be as illogical but I love them all the same. Other times I get random facebook messages saying "OMG COLLABORATE AN ARTICLE ABOUT *INSERT RANDOM TOPIC HERE* WITH ME FROST!!!11!oneone" and I say with deepest excitement "ok". Here is everything most things I have written or helped write.