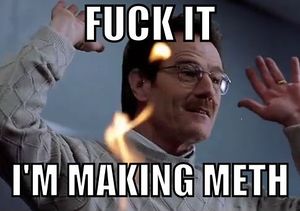 The show in a nutshell.

Breaking Bad is a television drama that takes the term YOLO quite literally. It is said to be of the greatest shows known to man, after Winnie the Pooh. 'Breaking bad' is also a term used to describe your first time making or using drugs, which may give you a clue as to where the title comes from. Or maybe not. Stop asking me for clues man, I'm just an article.

The show is about a highschool chemistry teacher who has terminal lung cancer. This combined with his extensive knowlegde of organic chemistry, access to all the appopriate ingredients and equipment and living in the deep south cause him to "break bad" and cook crystal meth in the middle of the desert with an ex student in a falling to bits RV.

For those who can't handle the real truth, the spinners of fake truth at Wikipedia have a thoroughly boring article on Breaking Bad.

A chemistry teacher from New Mexico, he discovers he has inoperable lung cancer so he needs some way of setting his financial affairs straight before he dies. Cooking meth seems like the obvious choice.

Because no show about drugs is complete without a stoner sidekick. When Jessie isn't smoking something illicit he can usually be found cursing loudly and eating bag after bag of junk food. He is also an ex student of Walt who has no chemistry knowledge whatsoever, so cooking meth seemed the obvious career path.

9/10 meth cooks use Breaking Bad as their complete guide on how to make methamphetamine, what sort of return they should make for a quality product, how to obtain the various chemicals needed to make methamphetamine and how to make their lab not explode[1]. It is also useful to other criminal figures in how to organize a dug cartel, extract deadly toxins and dispose of a body with no evidence.

Whilst it is claimed to be purely for entertainment purposes, the level of correct chemistry and crime organization is a little too inviting to some parties. Methamphetamine no longer comes from a "hand me down family recipe" on an Arizona farm property but from a fictional TV show done purely to entertain its audience.