“Daddy, whats that red stuff coming out of that mans ears?”

“You're Dexter! I love you because you kill people”

Spoilers: Dexter eats ice-cream in numerous scenes. This is a very false image.

Dexter (not to be confused with Dexter's laboratory) is a wonderful, family friendly show. Like all shows for the kids to enjoy, it features a guy living in a dream house doing his dream job, happy endings and a psychopathic main character that loves to disembowel other psychopaths.

Dexter is being used by parents the world over to encourage their kids not to kill people. "Don't kill people, or Dexter will get you!" Much like how Santa Claus doesn't visit naughty kids, only with more... drastic consequences.

Dexter's parents were killed when he was just a baby right in front of him giving him a never ending, vampire like urge to draw blood. Not in the artistic manner mind you. His adoptive father, a cop decided he would mold Dexter into a vigilante serial killer. In this so called "code of Harry" as it is frequently called (note: Not an actual code, just a metaphor) it teaches him to a) Only kill bad people and b) Not get caught, because we all know how much murderers ignore that last rule.

Like other shows such as breaking bad it hinges entirely on having a police force that cannot identify the freaking obvious. Despire Dexter working in the middle of the homicide department, being an expert on trace evidence and having a very strange obsession with blood, nobody thought for a second "hey, maybe Dexter kills people". Each season sees Dexter hunting down one particular bad guy often very successfully before wiping up all the evidence, disposing of the body without anybody seeing him and nobody noticing a total of 67 people have gone missing.

The plot of the introduction can be summarized as the process of eating the same breakfast, flossing and cutting yourself whilst shaving every single day. You'd think he'd just grow a beard, aye? It also involves tying up your shoes so tightly you lose all circulation before walking out the front door triumphantly as if to say "I'm definitely NOT a serial killer" *shifty eyes* 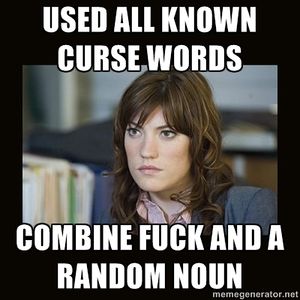 Thanks to Debra Morgan, Fucktree is now in the dictionary of swear words. 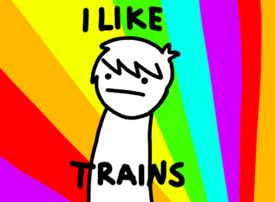 These are the main antagonists for each season respectively. They are now dead. 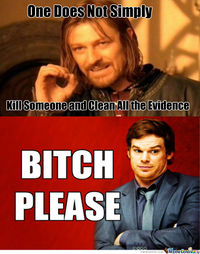 Most of the time people don't get away with murder, sometimes they feel remorse and hand themselves in or they leave a tiny hair or drop of their blood at the scene of the crime. Other times it's down to them being so freaking obviously the guilty one that even a three year child could work it out. Strangely none of the above applies to Dexter, he says multiple times he has no feelings and that he thinks the people he is murdering "deserve it". He is not obviously a psychopath because his colleagues suck at figuring out what is painfully obvious and he is able to destroy all evidence because "He's Dexter, bitch!"

The writers of this show are without a doubt the most heartless, evil human beings ever to pick up a pen and write. Not because they portray Miami as a city with more serial killers per square mile than anywhere ever. Not because they write a show that revolves around killers, blood and the "f" word. But because they thrown in horrible, last minute plot twists that leave every season ending with "I WANT TO KNOW WHAT HAPPENS NEXT, BUT I'M REALLY SAD NOW!!1" Mainly involving a main character you've just grown to love and accept being killed off or removed from the show. They suck and I hate them for having me like this show so much. WAAAAAAH....