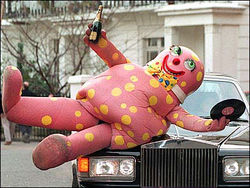 Mr. Blobby, a demi god of the class Bloby, will hug you until your soul melts into a malleable, golden wax, which he will extract from your chest and craft into a very buoyant scale replica of the Battle of Ghettysburg. Then you wake up in your pink-feather covered cardboard box and throw away the rest of the bubbly battery fizz you found. Another night on the Sunset Strip...

Mr. Blobby has his assistant, Mr. Drop, who runs around taking random samples of grass and cow dung. Once collected, (s)he throws the samples into a bucket and thinks. He thinks so hard to his brains turn to mush, which Mr. Blobby extracts with a a straw through Mr. Drop's nose.

Blobby, who likes to eat Noel Edmunds House Party guests for lunch, has recently been banished to the country for his people munching antics. He was last seen in 2003 sucking on human fingers dipped in chocolate. As of today, he is thought to have reverted to a lizard-like state, stalking the plains of Crinkley Bottom for the remains of half-eaten celebrities.