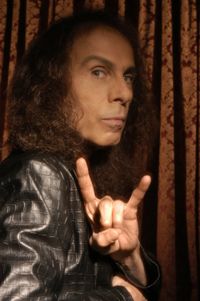 Good night, sleep tight, and don't let the Dark Lord and scores of his fiery disciples from the nether realm feast upon your immortal soul forevermore.
[[|   ]]

Sure, my manager keeps urging me to switch to a word processor... Call me nostalgic, call me old fashioned, but I think my creativity really flows with my favourite quill in a well of goat's blood.
[[|   ]] 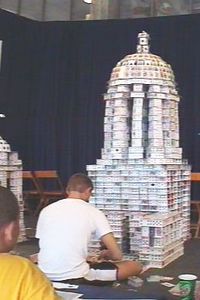 I swear to G- ...Gosh Suzie, you're about the prettiest girl I ever saw. And the smartest, too. And you're, like, the nicest girl I've ever met ever. Honest. I mean, you make me feel all funny inside, like I don't know what I'd ever do without you.

Another pagan served the death she so richly deserved (with a side order of your choice of fries, coleslaw or potato salad).

Ronnie James Dio (born July 10, 1942, in Portsmouth, New Hampshire, USA), is a heavy metal vocalist, 42nd level magic user, midget rights activist, and children's author. When he's not recording, touring, or being fired from or rejoining Black Sabbath (or Rainbow), he's reviewing student applications at the Ronnie James Dio Institute of Lyrical Technology. And, when he's not doing that, he's busy penning another kiddie classic in his tireless pursuit of a Newbery Medal.

In this, the long-awaited follow-up to 1980's Children of the Sea and 1985's Rock 'N' Roll Children, Ronnie gives some of the classic children's nursery rhymes his signature treatment.

Sell your soul in

The fragments of your wool;

And the minions of the game,

And one for the gypsy girl

All Around The Mulberry Bush[edit]

All around the mulberry bush

The snake pursued the weasel.

The snake bit deep, and blood did rush.

A penny for a shard of light,

That penetrates the darkness.

Who paid the price in mortal fight?

Up and down and in and out,

The path of twisted Evil,

Death awaits the ones who fright.

Out the doggie door from Hell,

Tricked the girls and told them lies.

And when his house of cards was falling,

He fled to Hell by Satan's calling.

Went up the hill

To sacrifice a chicken

But Jack the Catholic took offense

To Jill who was a Wiccan.

So Jack seized both

And hair so soft and wispy

And offered both on altar high

And broiled them extra crispy. 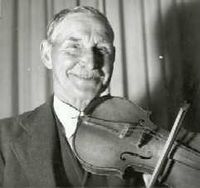 Satan's public image has improved considerably since he appointed Annie Leibovitz as his official photographer.

The night of the full blood-moon,

Lucifer laughed with a hideous snort,

His dish is where your soul will lie soon.

Monday's child is full of sorrow,

Wednesday's child walks from the light,

Thursday's child talks to the night,

Saturday's child is long in tooth,

But the child that's born on the Sabbath day

Is a dwarven pseudo-poet with a rock star toupee. 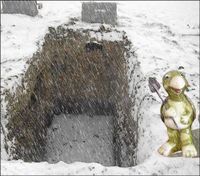 Travis becons you to the warmth of Good Mother Earth. From Dio's upcoming book "The Happy Little Grave Digger".

Dig me a grave as deep as you can.

Throw yourself in and send the bill to me.

A prayer of pernicious perversity

If Peter Piper prayed a prayer 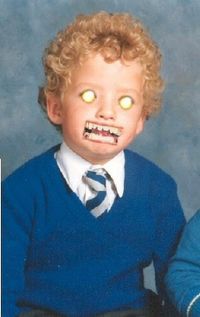 Little Jimmy Parsons, 8, enjoys biking, playing his Nintendo DS, and cavorting wildly over the trodden remains of his hapless victims.

What's the prayer of pernicious perversity

Gently under the stream.

You all shall die in a fiery blast,

From my nuclear submarine.

What Are Little Children Made Of?[edit]

What are little boys made of?

And need for a bath,

That's what little boys are made of.

What are little girls made of?

That's what little girls are made of.

Ronnie James Dio's Big Book of Nursery Rhymes will be published by Houghton Mifflin early next year in a large-format hardcover with copious illustrations by Peter Mihaichuk and (of course) the evergreen children's artist Hieronymus Bosch. Advance copies have been in the hands of critics for two months, and the reactions have been favourable: Andrew Rosenthal of the N.Y. Times wrote, "A refreshing work that any adult will enjoy reading to their child. Hail Satan!"