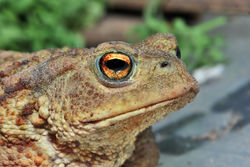 Toads have warts. Kind of like my bitch of an ex-girlfriend

Biology is the study of things that are alive, like trees, people, mushrooms, and roosters. What it does not study is my ex-girlfriend because there is no way that such a heartless bitch could still be alive.

Biology is often divided by the five kingdoms of life forms. The five kingdoms are Fungi, Protists, Monera (bacteria), Plants, and Animals. The differences between these kingdoms are highly debated among biologists and taxonomists (the people in charge of making these decisions). These scientists contemplate issues for a long time and make the decision that is best for everybody, unlike Monica (my ex-girlfriend).

Different types of scientists study different areas of biology. For example, the scientist who studies mating patters of humpback whales likely wouldn't be the same scientist who studies the conditions needed for infectious bacteria to survive. These scientists sometimes work in conjunction with each other, but often, they are left alone, as most people need some time away from other people, a concept Monica never seemed to grasp.

As a biologist, I currently study the root systems of cacao trees in the Amazon, a research area that someone--Monica--refused to understand the importance of. Whatever his or her area, biologists all do great work in search of better understanding the world around them. Monica, on the other hand, made no attempt to understand anything in the world around her, especially her boyfriend's feelings.

Biology is distinctly different from Bitchology, which is, of course, the study of my ex-girlfriend Monica. The branch of Biology most closely related to Bitchology would be the study of Fungus-Like Protists like mildew as they both deal with things that are slimy, dirty, and ruin bathrooms.