Can you please not remove any of the content or text from the illogic book. It is NOT, as you seem to believe, YOUR book. It was set up as a community project for anyone to edit, like illogicopedia. The only people that can't edit illogicopedia are bots and vandals, are you calling me a robo-vandal? Well are ya boy? :P Either way just don't remove anymore pages please. --Testostereich • (ballsack) 09:16, 21 Jeremy 2008 (UTC)

I don't mean to take anything out of the Illogic Book permanently. The only reason I'm moving things out temporarily is because there is a story I am working on and "move out, move back in" is easier than "move a few pages over, move a few pages over" over and over again. Also, I don't feel that it is my book; in fact I would enjoy having a longer list of recognized contributors. All removed pages will be back in as soon as the story is done (you are welcome to help add to it in the meantime).

Could I be the first to thank yew for being one of the few people not getting involved in all the harassment / flaming / bitching that's going on :P --

You my good friend have been chosen to enter The Small Brrother House!

Reject here by puttin ur sig on page.

I saw the edit count and i saw my name. Freaky. I never thought i had made that many edits. well thxs for including me on the list (Unlike Benedict Blade). Astalavista! ₪ Ragglefraggleking ₪ Is ₪ Eating ₪ Your ₪ Bagels 12:23, 4 Arche 2008 (UTC)

well it did b4 oh well its gon.

Penglish uprising - I was looking through the battle series and decided to make it. Needless to say I lost heart half-way through and opened it up into a project rticle for anyone and everyone to edit. I've done nearly all of what you can see ther but feel free to add to it as Benedict Blade already has done. --Testostereich • (ballsack) 17:17, 9 Arche 2008 (UTC)

1) Unless toby comes back, probably not 2)Yes.

Hey here are some frozen yogurt!:

I bestow this award upon myself[edit]

You votered on my first Illogicopedian feature. Thanks for that. It makes me feel proud and my mom feel more disparate about my future. I guess that second part's not so good.-Ljlego 16:23, 26 Arply 2008 (UTC)

Just saying thanks for all the work you're doing around the site lately. Very useful and very adminesque. I won't be terribly active for a while owing to exams and what not so yeah, thanks. :) Testostereich • (ballsack)

Hey SomeWhat to the Number to the 2 oh yeah![edit]

You know I like the illogic book, well my version of the conspiracy game, has become decidely story like. The way I see it my end product will be more like a story that the reader (thinks they) has influence over. Just letting you know.

You know, that once you find the hidden key you can go in the house. RFK (FORGOT TO SING IN)

Don't ruin the effect! - ₪ Ragglefraggleking ₪ Is ₪ Eating ₪ Your ₪ Bagels

Like a sausage we shall roll. BTW it might have to wait 'til Wednesday onwards because I will have finished my exams by then.

Mostly Testoriech wanted the original ending I made so I decided to remove that ending from that page since it was obsolete. Sorry for any misunderstanding --Taylor Karras 03:01, 23 Jumbly 2008 (UTC)

Welll, since you created it, hows abouts I unprotect it, let you edit it to wat you intended, then protect it again to prevent further changes? --Testostereich • (ballsack) 07:20, 23 Jumbly 2008 (UTC)

I would like to commend your efforts in repelling the vandal that returned last night. It is my personal belief that he is sexually frustrated, or just a c***. Anyhow, it just highlights the fact we need another admin for the US timezone, which I shall hopefully talk to Seppy about sooner rather than later. Good show! -- Hindleyak  Converse • ?blog • Click here! 11:26, 29 Ergust 2008 (UTC)

Congrats from another judge! It was close, but we decided your entry should win the hammer. Hammer I say! Once again, muchos, er, congratularatores! -- Hindleyak  Converse • ?blog • Click here! 16:20, 31 Ergust 2008 (UTC)

Hey Some WHAT!?. I'm making an IllogiTV video called "The IllogiDance Contest". It's gonna be stick figures representing the users and it will be random. I have THREE questions.

sorry if it isn't done uploading. It will be soon.--

Hey, your foodchiefs thing is a pretty cool idea, could I be the lord of junk food? :P

OIC fonchezzzz was going to be it first. How's about the Plant Foods one? :P

Can I be Lord of Animal Foods?

Hey someWHAT, i was reading you Foodcheifs thing and I'd like to be the Duke of Snacks if you can't find anyone. Just give an answer soon on my talk page or yours I don't care which, thanks. mwow13 00:17, 9 Serpeniver 2008 (UTC)

Can you put this on your page?[edit]

Can you put the following userbox on your page?

Well done, you have been voted the Illogicopedian of the Month for Serpeniver 2008! As a reward, you receive a banana trophy, rollback rights and the respect of your fellow crazy people. Bask in the glory of all it brings, for you are flavour of the month. -- Hindleyak  Converse • ?blog • Click here! 09:58, 1 Octodest 2008 (UTC)

Yay! it was close but personally I think you deserved it more (no offense to RFK, I hope he'll understand)

I'd like to be the Duke Of Snacks if i could....or did someone already apply for that position first? Well.....wishing well. --

Hey I would like to be the lord of the animal products cause I always wanted to be named a duke of dairy... or be in charge of a guy who is the duke of dairy. In return I will grant you a picture of a duck whipping out a gun. 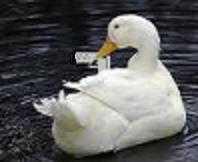 I hav the right to change this wiki.

Shut up i can type what i want u gay shit