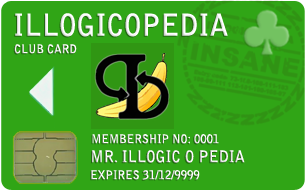 These fine fellows have been rewarded for their considerable efforts in the Illogia over their careers as raving loonies with the dedication award. They get a free Club Card - a handy advantage in ancient Indian card games where clubs were considered Gods. Though they receive no official extra powers *cough* they obtain an aristocratic status as well as the power of flight (it's levitation Holmes).

The League of Extraordinary Gentlemen, Penguins, Fluff balls, Metal Appendages, Escaped murderers,Guys That Have Raggle Fraggle in their name, etc[edit]

Has a Green Card, but always forgets about it. As such, it is usually stolen by the dog or even Seppy.

Actually, I'm Neo. I dodge bullets and I like guns. Lots of guns. At night, I'm Bat-Man a rent boy. :P

A knight who wears the gaze of a plum, all-returning for cleft of dimensional raid of oranges. Either way, Asema is known to use a specialized sword that has a %32.7 chance to ban the user against Asema's will, although Asema doesn't mind.

"I think my favouritest thing in the world is irrelevant physical comedy and... OW who hit me with a platinum scepter?"

I like long walks on the beach, vodka, long walks on the vodka, drinking sand, long walks on half drunk vodka sand, sand, myself, ASDA's own 'Great Stuff' no added sugar orange and banana flavoured spring water, flying over the houses of poor people in my helicopter and reminding them how poor they are through a megaphone, PWNz1ng MrMetalFLower at anything, blanking pages that people have clearly tried hard on, hitting people in the head with a stick, making up fake likes for the sake of a longer section about himself, I wonder when the new top gear series begins, I have a wedgie, wedgie rhymes with veggie *writes down*, I hope have pizza tonight, stuffed crust, no onions, yeah, that'd be nice, might eat in in the living room, or the kitchen, not the office, might get pizza juice on the computer, that'd be bad, lol, our stocks broke, FTSE got pwnzed, I think im in the mood for scented candles, no, thats not it, damn, what is it I need, ah yes, *eats gravel*, This random homeless tramp, uuuh etc. I reside in the temple of doom, otherwise known as Hextable Town...of doom, im not gay (unless he's rich ;) eh? eh?) and i hate anyone who uses the word 'funky' to describe anything but myself. I have been told my smile is annoyingly enigmatic, and sexy. Vodka. Love me yet? Cos if not, i will continue to assult you with random facts about how great i am till you cannot resist me!! Mwa-hahahahaha-ha-hahaha-he-lahahahahahaha-mohohohohohoho-weoweoweoweo-lampwindowomglol...etc and whatever or something...

I like ducks. I like platypuses.... I am a duck, however I am not a platypus. Well you know when you really like two things... and you have to choose only one? Well that was one of those situations. Not so fun. Well i chose to be a duck. And ya. I am a duck, with a bill, webbed feet, and the friendly, happy sound.... Quack! Well, I also had an encounter a few months back with a creepy, CREEPY, person clown thing. He goes by the name.... Bcbkye then he bashed my head on the key board.... typing in b-c-b-k-y-e and thus, his name. Well in the last few days i have been taking a break from the illogicopedia stuff things, so i just came back, got this message, and ya. I haven't read a thing on this page, so i'll check it out..... Quack on?--

By the way, am i the escaped murderer there? If so, how do you find out these things about me???

I been Subliminal Massaging the penguin flocks hear since Spring last annum. Not much happens around these parts - I barely notice the evil grandma's with missiles anymore. My 360 degree form Oxford University of Moon hygiene must have got me into this club, or maybe it was when thrown through the clubhouse window by an enraged non-Club Card Carrier...

After being banned from numerous websites (for completely bullshit reasons, but that's another story), Flameviper settled upon Illogicopedia. After becoming one of the 'founding' members of the site along with Silent Penguin, Nerd42, and Hindleyite, the Flamey Snake decided to camp out on ?pedia.

Wikipedia, Random Insanity Online, Uncyclopedia, Encyclopedia Dramatica (not that they ever did), 4chan (for a week in June '07), 7chan (for a month in December '06), Empires of Fire (although it was an accidental ban which was later reversed), Fire Emblem Planet, Fire Emblem World, and probably GameFAQS2.

Flameviper makes a sprite comic called 16-Bit Theatre, and has made many Flash animations for Oldskies. He also draws stuff in the margin of his English notebook, and has a bizarre penchant for beating the crap out ofbattling Asema on IRC. It has been said that he eats wiki code and craps out featured articles. He also uses Photoshoop with a basic level of talent, and probably can make something that rocks using Photoshop3. And also, he makes custom Fire Emblem sprites, and rocks out loud in Microsoft Paint (no kidding). So I guess that's all the stuff you need to know about Flameviper.

1: If you call him "Sparky", he will fucking kick your ass. Seriously.
2: I haven't been banned from GameFAQS, but I could probably make it so if you asked.
3: (No subliminal messages in the preceding sentence. Give me all your money).

ai, and then he flwe.

A can and a toilet paper roll next to each other on the window sill. Which is which?

You'll never get me to go to the asylum, coppers! -runs smack into asylum doors-

I joined Illogicopedia on the 10th of Novelniver as User:Some WHAT!? but then forgot my password right away. I had to create a second account. That's why my user page is at User:Some WHAT!? number two. I was given the Dedicated User Award on the 22nd of Jeremy.

I joind ?pedia around February 13, 2008 while looking for a host to make my nonsense encyclopedia. I came upon Wikia and decided to see if they would except The International Society of Nonsense. Little did I know that there was already a nonsense site. Before my request came back, I found a link to Uncylopedia and shortly viseted. (I have a uncy account but never use it). Upon the return of my request I saw that Illogicopedia would love to have my contributions. After about two months here I have finnaly won this dedication award and if there was such an award, I would win the Longest Paragraph for the Club Card Members section. I was given the award on Aym 4, 2008. Che'ears.

This user is hopeless at anything surrealist or abstract, yet still attempts out random tomfoolery like everyone else. He joined in December '07 and soon after created the interactive IllogiGame Big Brrother. Since then he has retired 5 times, taken part in numerous flamewars and, oh yeah, got one solitary feature.

According to T3canolis, his sexuality is "still in question" (there are numerous reasons why one would reach this thought).

Please point out if I have. Remember the award goes to those with long, quality-laden and effort filled careers in the illogia. No offense to anyone without an award, because you're all specialneeds --Testostereich • (ballsack) 18:54, 1 Serpeniver 2007 (UTC)