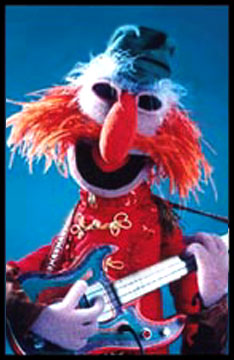 As Flea did in the 1990s, and Geddy Lee did in the 1980s, Sgt. Floyd Pepper of Dr. Teeth and the Electric Mayhem inspired great numbers to take up bass guitar in the 1970s.

A bassist or bass player is either the most revered or most pitied member of a musical group, depending on the genre. Because of the wide range of music types that utilize the bass, and the varying amount of talent required to be successful within each, bass is a highly desirable instrument for players of all levels. Alongside drummers, bassists are often the most accomplished musicians within a band, or an unemployment benefits queue.

No one else wants to[edit] 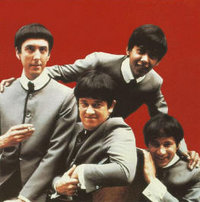 History teaches us that what originated as the drawing of the shortest straw, has also been the beginning of many a great career. Take Paul McCartney. He’s written some of the most beautiful and well known bass lines in rock and roll, but not because he wanted to. No! This milestone was only achieved by a lot of punching, kicking, screaming, threats of desertion, shouts of "deserter!", tears, flowers, dinners out, and making up. When George Harrison joined what was to become The Beatles, the boys from Liverpool found themselves with three guitarists. George and John were just too stubborn to switch, so it fell to Paul to make the ultimate sacrifice. Selfish bloody bastards. But Paul showed ‘em, didn’t he? John got himself shot by a fat guy how blows up imaginary gnomes for kicks, Ringo's a recluse, and no one bloody cares about George. But Sir Paul lives on, dating hot models and actresses like a young rock star, and gets to be called a knight with out all that "Chivalry" crap. You go Paul!

Here’s an example to illustrate the point:

As a birthday gift, a father decided to get his son a bass guitar and some lessons. After the first lesson, the boy's father asked him how his lesson went. "It went great, Dad. I learned to play on the first 5 frets on the top string!" The father praised his son's efforts. The next week, his father asked about the second lesson. "It was cool, Dad. Today, I learned to play the first 5 frets on the second string!" His father once again applauded his son. The following week, his father again asked about the lesson. "I'm sorry Dad, I blew it off... I had a gig!"

This is only a slight exaggeration of the truth. You’ll probably need more than two lessons to get a good gig (hell, I needed four), but even if you suck there’s probably some desperate group out there ready to beg for you to join them. Even without lessons, and never having touched an instrument, you may already be overqualified to play in a punk band.

Even without lessons, and never having touched an instrument, you may already be overqualified to play in a punk band.
[[|   ]]

If lack of experience isn’t a factor, why should lack of intelligence or talent be? Bass is a lovely, uncomplicated instrument. You only have four strings to start with, and there’s no rule saying you actually have to use them all. In fact, the world is full of players making an awfully good living doing the absolute minimum. Yes sir, with only a steady stream of monotonous eighth notes, you too could tour the world, earn millions, marry a supermodel, and be on the cover of prestigious magazines. Creativity? Optional. Songwriting ability? Optional. Just find a talented singer, guitarist and drummer to do the real work for you. Initially, they’ll do it all and still thank you for just showing up. Later, if fame and fortune comes, they’ll probably keep you out of some misguided sense of loyalty.

You can pick and choose who to work with[edit]

Part of the beauty of being in demand is the ability to be selective. Your band needs you. You don’t necessarily need them. If all else fails, they’re expendable, like those cameo crew members on Star Trek. That doesn’t mean you can be a whiny, demanding, snotty faced prima donna, holding your bandmates at ransom for fear of losing you—although that’s a temptation we all face. It does mean you can escape a dead end situation and find a more promising one with relative ease.

Keep your bass with you at all times, or else groupies might think you’re just a lame roadie trying to score.

You can be a star but still avoid the spotlight[edit]

People don’t think twice when they see the bassist lurking near the rear of the stage, behind the singer or guitarist. Or drummer. In fact, no one thinks twice when there’s no sign of a bassist, because he’s expertly camouflaged himself to blend in with the wall draping. For a bassist, its not only socially acceptable to be a wallflower, but in some situations—it’s downright encouraged. One less ego makes for a lot more room on the front stage. However, backstage – after the show – you can still tell the girls you’re “with the band” and cross your fingers.

Watch out for lame roadies borrowing your equipment and pretending to be “with the band” in order to score with the groupies. Your chances are slim enough without the extra competition.

The shortage of bassists has been something of a boon for sad losers everywhere. In the olden days, dorks used to have to become engineers and programmers in order to have a chance at fame, fortune, and fabulous babes. In this new age of promise, even a nerdy, obese, slovenly oaf with body odor, lice, dandruff, and chronic halitosis, with the social skills of a table lamp and the IQ of a turnip, can be in-demand, successful, and lusted after. Just look at Wolfgang Van Halen. Rejoice!

You can wear a sock over your privates, and generally act like a lunatic[edit]

Even if you weren’t a social reject to start with, you owe a debt to Michael Balzary — an inoffensive, trumpet-tooting kid born in Melbourne, Australia. Thanks to him, it’s now artistically acceptable to cover your one-eyed trouser snake with a white athletic tube sock, while bouncing around like you’ve inadvertently plugged it into a live power outlet. Of course, we are referring to the bassist better known as Flea, who made wearing ugly gitch and bass playing fashionable in one fell swoop. Hail to the Chief.