For a road trip, the best place to sleep is a motel. One thinks of a motel as a nice place to hang out for the night. However, if you closely inspect motels, you will find something much more evil. In every eighth room you will find something very small and ugly, and that, sir, is not a broken car jack (which we all hate), it is a motel troll. Motel Trolls are stupid little beasts that sneak into your bags and eat things. They serve no purpose, and many scientists believe they are really gnomes. However, they are not gnomes, or else they would be called Motel Gnomes, not Motel Trolls.

No one is exactly sure where Motel Trolls came from, all we know is that they were devolped/created/pooped out sometime between the beginning of time and now. Several theories have been proposed as to where exactly these gruesome little things came from, but none have in fact been proven. Scientists and plumbers believe that they were created about 32 years ago when some garden gnomes were playing around with some nuclear waste. They accidently spilled it, took a swim, and forever changed. Most of them died, but a couple needed to go poo so they ran off to motels for no reason. No pictures of these Motel Trolls have ever been taken, but many artists have given their renditions of them. 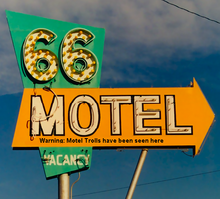 This motel doesn't have people sleep in every eighth room.

All Motel Trolls are of three distinct breeds: Orange, Green, and Unsinkable.

Motel Trolls can be found in two places: the northern and southern hemispheres. They also tend to dwell within Motels. Unless, of course one moves into their hotel room. But we'll talk about that later.

In these motels all of the trolls sit around. Usually, there is just one inhabitant in the room, who tends to sit under the bed continually playing solitaire with himself. Whenver he gets hungry, he eats the pillows on the bed. This distressess the motel owners, who think that rooms eight, sixteen, twenty four, thirty-two, and fourty have a group of notorius robbers who rob only those rooms of their pillows. However, they are wrong, they only have a hugry motel troll hiding under the bed with a deck of cards. Motel Trolls are expensive additions to a motel. Motel Trolls also like to swim laps in the sink when they have the time. However, their schedules are usually to full of cards games, so swimming is a luxury for them.

However, despite their name, some Motel Trolls have lived outside of motels. This happens when a person sleeps in one of the rooms the inhabit. When the person sleeps, the troll loudly thumps around under the bed and then crawls out with a knife it constructed from only cards. Then, if the person is asleep, they crawl into their bags and eat all of their underpants, and, if they're lucky, there will be a cell phone for them to devour. They hide under the persons old clothes, and wait to be discovered.

If you ever manage to get a Motel Troll in your bag, you must treat it well at your home, other wise it will rip your flesh off with a spork. No seriously, it happened to me. However, if you keep them happy, they start to smell like lavender and keep your home/apartment/box smelling great.

When you take a Motel Troll to your home, they will immedaitely sprint behind the sofa. No one knows why, but they do it and it is a proven fact  [

Certified Accurate!]. After about ten days of hiding behind the couch, the nearly-starved-to-death troll will leave its hiding place and eat a pillow. Then they will beg you for "cabbage". Anyone with a brain would notice them crossing their fingers, and therefore not give them cabbage, but this is the wrong choice. Give them the cabbage; they won't like it and will probably run away. But if you don't give them cabbage, they will eat all of your pillows and then call the police.

If you have a hungry Motel Troll, you are in trouble. If their hunger is not satisfied, they tend to run around throwing all of your money into the fireplace. To feed them, you should keep a good supply of pillows by where ever they choose to dwell in your home. If they move, you best move the pillows as well, because Motel Trolls don't like walking more than two feet, unless they are going outside to poo in your garden. Don't worry, it makes an excellent fertilizer!

If you really want to indulge your Motel Troll, you will get him/her very expensive pillows made of silk. They enjoy the small fibers and use them as floss and toilet paper.

Motel Trolls as pets have many downsides to them. In fact, they have negative value because they have no upsides whatsoever, unless you consider having to buy new pillows every week a good thing. Other downsides to these creatures are the fact that they can only inhabit your home peacefully if you have eight or more rooms. If you have less than eight, they will be very uncomfortable and probably pee on your garden and kill your plants, rather than poop on it. Also, Motel Trolls have been known to turn into overcooked broccoli when they are very mad. 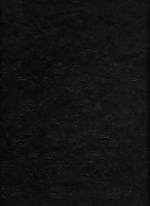 A slightly censored image of a Motel Troll reproducing.

Every knows overcooked broccoli smells really bad, so do not get your Motel Troll mad or else you will wish you would never had the ability to smell (Trust me, that's not good. And, and the same time I wished that I couldn't smell there was a genie conviently nearby. Now I cannot smell anything.).

Motel Trolls have sadly met a steady decline in population. This may be eexplained for several reasons:

If only one of these reasons was removed, Motel Trolls probably could have survived. They were attempted to be protected, but there was no stopping their deaths. Apart from that, the societies attempting to protect the Trolls realized that there was absolutely no benefit in doing such a thing, and therefore shut down the whole operation. The last known sighting of a Motel Troll was sometime in 2004, but no one is really sure.