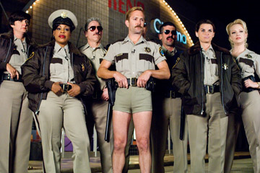 "Upholstering the community since late 2006!"

“Lunchtime's over Hindles, some guy on fifth street's just popped out a self nom.”

The VFF Police patrol the cyberspace that is VFF, eating Micro Pizza and saying vaguely cop-ish things like "Tango Bravo Foxtrot 123". This is in fact coded police language for "chicken on the bone", or, in English, "the sockpuppets are invading, fetch the vandal smashing bat".

When in action, they always carry a large stereo playing the song 'I Fought the Law' whilst beating up innocent civilians Illogicopedians for "refusing to give head on demand", or because "they just don't like them".

The 'force' consists of a large Austrian person with abnormally high testosterone levels, a penguin that does nothing but eat fish and say "what's the point of all this?" plus a large numbers of hangers-on that vary from movie to movie assignment to assignment. 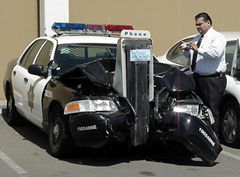 "MetalFLower, what have I told you about ramming into tall hard things?"

When a member of the force spots a misdemeanour, a rather loud and annoying bell goes off at HQ. At this point, the chief is required to say something like "me basterd ears!" or "someone else deal with it". Following this, large numbers of cops swarm VFF like a plague of locusts to bring the miscreant down in a torrent of ego-bruising comments:

“Against: Meh, didn't make me laugh”

“Against: I'm sick of all these stories”

Usually, the felon backs down and storms off in a huff back to Habbo Hotel, or whatever it is kids play these days. On rare occasion, though, a fight of wills breaks out, sometimes resulting in heated combat on Recent Changes. A number of pages are subsequently moved to 'Hagger on wheels' and this continues for many days until a member of neighbouring force Wikia Patrol is dispatched to deal with the situation.

No police force would be complete without humorous training sequences adequate training. The typical recruit is put through their paces in a series of tests designed to tax their will, skill and general ability to turn into a werewolf when the moon is full.

The recruits, now wizened, and covered in goatse scars are transported in an unmarked car to an unspecified underground location and sat in front of a telly. Only those that survive the full 54 minutes of "2 Girls 1 Cup" (director's cut) will graduate.
Despite the hefty fines (no self noms for a month, a £2 fine and an infini-ban to the face) that befalls users attempting to replicate this event, terrorist organisations affiliated with Encyclopedia Dramatica have been noted to get ahold of and watch this training video for fun?! IllogiMI5.3recurring are doing their best to clean the internet of such people, though someone put red noobs in with the whites again (I'm looking at you, Seppy) which has increased the task's difficulty tenfold.

The zillion or so straight-to-DVD films (53) made after the second one were actually just blank CDs. The manufacturers, cleverly assuming no one would watch them didn't bother actually making them. Despite this irrelevance, avid fans of the non-existent sequels span the globe, squabbles often breaking out over the exact plot relevance that the white noise on the tapes had, or whatever happened to the guy who coughed in the background accidentally during filming.

The year is 2056, a number only slightly higher than the amount of people who were alive when the original came out....

...Crime has evolved since then, criminals are smarter, drink Martinis, and pack some serious heat...

....The police have had to adapt, evolve, make budget cuts, or face the unthinkable.....

.....For every criminal they kill, three more will take their place, and imprisoning them means signing their own death warrant (it's part of their contract. No one quite knows why this strange technicality was made law, though it was only included in after LSD was made legal....), charred police hats, empty pepperspray cans and discarded hotpants litter the streets, only the bravest remain.......

Unfortunately, by the time this sequel came out the average age of the recruits was 97. The three toothless decrepid and now slightly-racist rookies left were promptly accosted by criminals, mugged, beaten up and stabbed. They died the next winter of pneumonia. 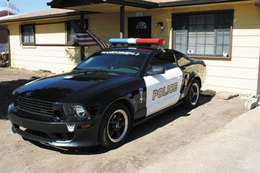 "Fred, I don't think the primary school is in our jurisdiction. Fred?"

“I'm arresting you under the charge of disturbing the peace.”

“What?!? I was just standing here quietly, thinking to myself.”

~ Kid on the street

“Well you were thinking Too Loud, my ears are haemorrhaging!”

“Screw you cop... (the kid turns up the volume on his MP3 player, and presses one of the head phones against the policeman's chest) ”

“What do you mean I graduated? I'm not an admin for Pete's sake, I only came in here because I thought it was a public toilet.”

~ Someone dedicated to the job

“That would explain why for a large part of the course you were simply defecating on my desk.”

This is an Unwarranted Title[edit]