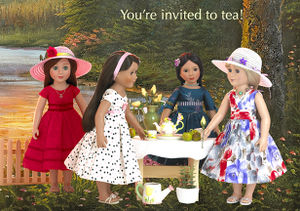 Contrary to popular belief, this isn't a playtogether.

It is my unbirthday today, and nobody remembered.

Of course it is traditionally celebrated on the day of one's unbirth, but I've been through quite a few births now and am feeling a little over the hill, so to speak.

Well, what a wonderful surprise[edit]

Well the only reason everyone was out of supplies in the first place was because they were planning a surprise unbirthday for you, anyway. Nicki Minaj was only outta silver paper because she was busy cutting them into moons, stars, and flannets. Coooooooookie Sugar-chan was out of sugar, probably because Nicki Minaj ate all of it. Circus Afro Bigtop Peanut wasn't able to perform her party piece for you because she was, at that moment, pretending to be sick.

Why don't you just use your magic or whatever to make stuff for your party?[edit]

I mean, why go ahead and make your quadruple-layer chocolate cake the traditional way if you can just wave your hands around, do some fancy stuff, and voila! Silly hair.

Looks like she got a unicycle for her unbirthday and decided to go ahead and be reckless with it. Better watch out for the insane Jackson Pollock lady and her supply of blue poles. Or someone having a picnic. Picnics are precarious. Almost as precarious as blue poles.

Nevertheless, this show is infinitely better than Game of Thrones. That show is a load of bollocks and mainly involves people doing weird things with their sisters.

There are also those who believe that centrifugal force doesn't really exist, but however, is just centripetal force in disguise. YOU FOOLS!

But I don't wanna go to sleep! Waaaaaaaah!

I wanna stay up and drink my milk and cookies and possibly injest caffeine if I have to and react paradoxically resulting in seizures and colourful dance videos. What do you think we should do, Sheep?

I am afraid of the dark and insects and planes and the SUN. Though I must act brave otherwise the citizens of this fair land will no longer have faith in me as a knight in shining armoOooOooOOouur, but rather just a fOooOooooOOooOol wrapped in tin foOoOooOooOOooil.

Oh. I think I left my amulet downstairs.

Episode 6: This is a Western novel, not a detective series[edit]

Bellatrix and her sidetrix Curlytrix went on some wild West adventuretrix for a total of seven hours and fifteen minutes. It wasn't long before they encountered the cactus of doom on a doomy peak somewhere in Northern California.

Then the villain became trapped under her own table after she served everyone snacks. The end.

Episode 7: Rollerskating on a sandy beach, even though that's physically impossible[edit]

How did my owl go blind in one eye? When did this happen? Maybe it's something to do with the fact that he ate three burgers that were floating about in the breeze.

Now to deliver these burgers. About fifty of them, to be precise. It's better then eating sand anyway.

Turns out Miss Centrifugal 2012 didn't get much screentime because the series writers were racist, plus they had to make about fifty years of room for Preppy McPrepperson, the brand's only ambassador and thence participator in the fish bucket challenge. Kinda serves her right, to be honest. Though, to be fair, I guess I did try and wake up my sleeping roommate with my busking amp and a few juggling acts. And then reclining on that lump in the bed ever-so-casually whilst uttering a faint "So... good evening."

I AM THE ONCOMING STORM.

Episode lol69: Not the sheep again[edit]

Illogicope-tan has lost her sheep and doesn't know where to find them. Probably because the first one was elderly and likely almost dead. I've never seen anyone run so frantically around their room whilst still in their pyjamas. Rollercoasters make me ill, but maybe it's because I pretty much live on a staple diet of cookies and other unhealthy baked goods.

Meanwhile, your actual pet sheep is quite frankly feeling disowned and might go on a quest to find a new owner whilst engraving its plight into trees like that gopher did. Turn it to anything but 'tap'.

Episode 10: MARCH OF THE APRILMAYS[edit]

Lock up your pets because a menace to society is on the loose and she claims to be jocular, trustworthy and not a menace. If you ever happen to catch her off-guard, wait until later on in the day to open up the space-time continuum. Press A to enter the funfair, by Force and Styles, on Bonkers vol. 1 mixed by Hixxy. In the meantime, Misty Mysterious has got herself serious. I mean, that waistcoat of hers was a little ridiculous, don't you think?