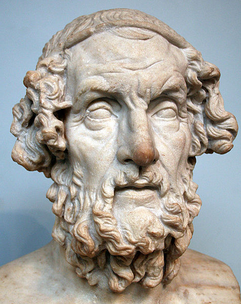 “"Mr. Plow,
that's my name.
That name again,
is Mr. Plow."
And that son, is why Peracles had to die at the hands of the giant.”

~ Homer on giving his son nightmares

“It's always good to have fans.”

~ Homer on painstakingly watching the VFF

~ Homer on Krusty the Clown

“Ah feck, too many quotes. Now I actually have to write the damm article”

~ Me on around now-ish

Homer, or Dave to Trigger out of Only Fools and Horse's, was a Greek philosopher, story teller, admin and nuclear power plant safety inspector. He wrote the Odyssey, some of Anne Frank's diary, and the original edition of Playboy. Being quickly fired from the latter for filling up the magazine with longwinded prose, so much so that only spindly women with A-Cup boobs could fit in the space left. 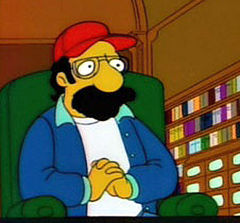 Steven Spielbergo, no relation, i just look at the picture and it makes me laugh

Homer was conceived on a cold friday morning, sometime in the distant present. As I will soon go great lengths to describe, at some point the two parents, consensually or necrophelially engaged in wild ravenous passionate sex. Admist the many sperm spilled, Homer somehow found his way to the egg, fertilising in the womb, and burdening his father with a hefty childsupport policy for an intended one night stand. Love of course, hadn't yet been invented back then.

Homer's childhood was a happy one, and within weeks of being born he'd germinated into a small pot plant. Further treats of fertiliser and anabolic steroids helped him make the jump to human, though he never forgot his roots. Which would have been hard seeing as they were protruding out of his arse.

Homer's teenage years passed without incident, only ever once speaking out against his parents, to complain that every parapgraph in this article begins with his name as opposed to the many literary starting points the author could have chosen. For this he was savagely beaten and his stash of Miricle Grow confiscated. Exams passed and soon he was a fully grown man-sunflower hybrid with a secure job at Netto's, and a low rent apartment next to some cannabis in a UV-lit soil-rich basement.

However, around the winter of somewhen things started going against him. He was diagnosed with stem rot, and fired from his post as protagonist at Netto's by Mr.Burns. With a large television family to support, and an expensive oaf habit to maintain he quickly spiralled into depression. The indebted loser was faced with little hope, and even had to pawn off some of his organs to scrape through the winter months.

That's when out of nowhere, he wrote the Oddysey. A literary masterpiece. Homer had it published immediately, the book grossing at over £2, it was a hit. To this day, no one is quite sure how an illiterate manplant crossbreed capable of no independent movement (other than turning to face the sun) managed to write such a fine piece of art.

Due to a planetary morphology incident the world was now Homer's oyster. He died shortly after, choking on the shell.

Despite dying, Homer wasn't in fact dead at all. He didn't die for another two years, before finally not succumbing to natural causes. His family were around him as he finally didn't pass away, blaming his not-death on the years of Bart abuse. The funeral is this Tuesday.

Homer is in no way linked to Homo, which is much funner.