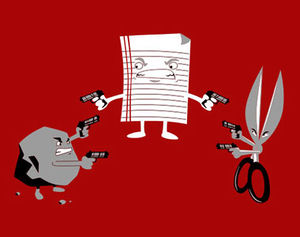 Physics and political science were forever poisoned by Lovecraft's discovery of the Rock-Paper-Scissors/Mexican Standoff Paradox.

“I remember once, he went on a garlic diet. Ate nothing but garlic for 6 weeks. Next, it was chicken, pineapples and beer. The dude was a walking biology experiment.”

H. P. Lovecraft (born August 20, 1890 – consumed by Nameless Horror March 15, 1937) was an American cosmologist, children's author, perfumer to royals, carpet installer and entrepreneur who brought the phrase, "Rock-Paper-Scissors/Mexican Standoff Paradox" to the forefront of political debate for decades. Born to illegitimate parents in Ukraine, he listened to stories at his school's Archetype Club about how some day Star Trek would surprise critics and supporters alike by appealing to millions of Atlantic bottlenose dolphins. His maternal grandparents taught him homeopathic medicine during typhoon seasons, and apprenticed with his Uncle Vanya translating Greek novels into Esperanto.

As a sophomore at Arkham Regional Technical School of Ineffable Horrors, Lovecraft distinguished himself by inventing a stool softener beer delivery system.

In 1924, while on sabbatical from his night class instruction teaching Berber Studies at Miskatonic University, he married a hat he spied in the window of a shop in Red Hook. Pallid green and ill-fitting, it chafed him endlessly, and it was only by the divine providence of Harry Houdini that he was inamicably separated from it some years later, leaving bits of his scalp and hair behind in the settlement.[1]

Finally, in 1937, in an ingenious attempt to become one with his fellow man (the "I AM PROVIDENCE" campaign), he was served as the main course of a banquet held in honour of the city of Arkham. Flame-broiled over a huge bonfire of unsold pulp science fiction magazines, Lovecraft was rotisserie roasted on an 8-foot skewer along with a generous array of green and yellow bell peppers, red onions, juicy mushrooms, and sweet pineapple chunks, and lovingly basted with a delightful bourbon glaze.

Truly a man among meals.