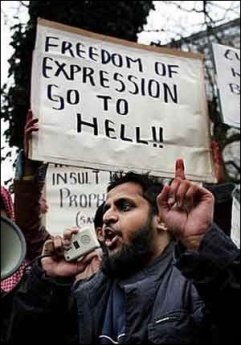 Extremist cigar bandits in Pakistan have hijacked Huxley's trademark phrase to further the cause of Jihad.

Aldous "Wicked Pissa" Huxley was born to a Scottish cat-eater in 1378, preserved in a glacier and revived in 1916, just in time to see the end of the First World War. His greatest contribution to modern literature was the catch-phrase, "Freedom of expression, go to Hell!". Immediately following a traumatic pants sizing, he proclaimed this and "the hurdles are set too high for the Sufi competitors... smell this!" to a surprise meeting of the British Parliament. Roused to their feet, and then to their knees, the various Ministers vowed to travel to the Netherlands, and then onward into the Hinterlands, until the Papist plot to buy the rights to the movie Caddy Shack was exposed to the world.