For those who can't handle the real truth, the spinners of fake truth at Wikipedia have a thoroughly boring article on Amphioxus.

“If there were no Greeks greater than Amphioxus, then he would have been the greatest Greek of all.”

Amphioxus was an ancient Greek writer, hypochondriac, and primitive chordate who flourished from around 385 to 309 BCE. He is famed for his tragic play "Adenoid and Thorax", which recounts the consequences of King Pankreus' influenza.

The exact date of Amphioxus' birth is uncertain. His mother recalls: "It was sometime in the spring, possibly around November. It must have been a Monday because I put the placenta out with the trash and it wasn't picked up for two days. The vultures were all over it."

He grew up in Marmarion, a seaside town in New Jersey. NO! Wait. We don't know why we wrote that. Marmarion is in Greece.

At any rate, young Amphioxus had a carefree childhood playing stickball and kick-the-Turk in the quiet streets of his little town. He fished for peanutbutter-and-jellyfish, speared rats, teased his sister, and abused the occasional sheep.

In other words, it was an average Greek childhood.

In 361 Amphioxus' mother sent him to the Lyceum at Athens to continue his educational abuse. There he studied with Pantagoras, who for several decades had been working on a theorem on the uniqueness of dirty words. This anticipated the uniqueness theorems of modern mathematics by 2300 years but was too smutty for publication.

After 7 years of study Amphioxus graduated the Lyceum with an MBA and a raging case of hypochondria. 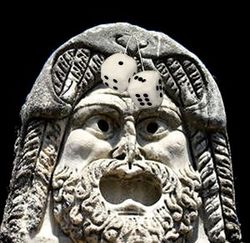 This sculpture of the Greek writer Amphioxus is especially notable as it is very hard to carve fuzzy dice in marble.

After graduation Amphioxus moved into his mother's villa in the hills above Athens, where the cypresses towered over blue swimming pools and the parties were legend. Here he brooded over imaginary aches and illnesses, drank more wine than was strictly healthy, and collected postage stamps. Here he also wrote the works which made him famous, and which are still read by one or two people every decade.

In this work Amphioxus recounts events of the Trudgin' War. The first five books of the epic chronicle the foot problems that Achilles and his army experience as they walk from Sparta to Cathay in order to challenge the Catheters over a bottle of Bromoseltzer. In the last book they finally reach the city. Hector, hero of the Catheters, battles valiantly against Achilles and the Greeks, but is overcome by indigestion. Recognizing the tragic greatness of his opponent, Achilles praises Hector. He then swallows the entire bottle of Bromoseltzer and explodes.

Amphioxus' literary agent, Jackal Onassis, could not find a publisher for the epic for several years. Finally The Bromeliad was put out by Atheneum Scrolls on cheap papyrus, and promptly remaindered.

This huge book was apparently meant to compliment Hesiod's Theogony, which is a poem describing the Greek gods, their origin, and their relationship to Greek kings. Amphioxus' book attempts to extend Hesiod's work by detailing the gods' health issues. It begins at the top with head lice and finishes, 1500 pages later, with bunions. Several long chapters are devoted entirely to afflictions of the the bowels.

It is not pleasant reading.

Unfortunately we have only fragments of this work, for when Amphioxus showed the first draft to Jackal Onassis she threw it into the swimming pool and most of the manuscript disintegrated. "Για τη χάρη περιττώματος κάτι χαρακτήρας-που οδηγείται γράψτε!" she shouted, which, roughly translated, means "For shit's sake write something readable!" 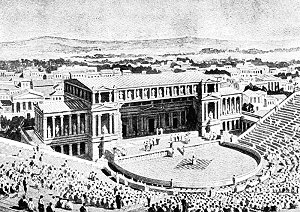 Artist's conception of the theater in which Adenoid and Thorax was performed.

Amphioxus' masterwork is surely the tragedy Adenoid and Thorax. The play begins as Adenoid, daughter of King Pankreus, petitions the Cretan nobles for a cough remedy for her ailing father. The council of nobles, led by the Prostate of Crete, advise her to go to Sybardis and get a second opinion. The Prostate, a sinister nobleman named Xanthoma, watches young Adenoid leave the council chambers and muses,

On the voyage to Sybardis Adenoid's ship is captured by pirates. A handsome young pirate, Thorax, falls in love with Adenoid. Adenoid and Thorax escape the pirate ship by jumping overboard, and friendly dolphins rescue the lovers and carry them away on their backs. Adenoid is frightened, saying,

Strange sea-creatures! Who knows
what diseases infest your skins.
I hope I don't end up catching
a nasty crotch-fungus.

But Thorax reassures her:

Do not worry, my fair love,
diseases from dolphins to humans
are non-transmissable.

Here a cunning plot twist come into play. Although Thorax never knew his parents and was raised by homosexual centaurs on the island of Lyposuxion, he is in fact the real Prince of Belare, whose throne has been occupied by the Nordic barbarian Wilsmuth. By an amazing Greek coincidence Adenoid and Thorax are taken by the dolphins right to the Principality of Belare. There Thorax is recognized by an old beggar-woman as the rightful prince of the realm. In the usual Greek setup he is challenged by the evil Wilsmuth to hurl a great war-javelin 300 meters, a feat that only a member of the real royal family could perform.

However, Thorax turns and tosses the javelin a measely 3 meters instead, spearing Wilsmuth right through the stomach. "Oh you bastard!," cries Wilsmuth. "You have perforated my duodenum in at least two places, and possibly caused a hematoma in my left kidney as well. And my HMO does not pay for spear wounds!" Wilsmuth then topples over stone dead.

Since Thorax has slain Wilsmuth in a particularly unsporting manner, the Belare Neighborhood Council proclaims that in order to claim the throne Thorax must journey to the underworld and steal the god Pluto's black silk undershorts. Tearfully Adenoid begs to accompany her pirate lover on his quest, but Thorax demures:

To journey to the realm
of the god of death
is to risk contracting AIDS,
mumps, or athletes' armpit.
Stay, sweet Adenoid, and fetch
some cough syrup for your dad.

Moved by the plight of Adenoid the Belare Neighborhood Council gives her a case of Robitussin. She takes a fast boat back to Crete, unaware that Thorax has meanwhile mistaken an abandoned coal mine for the entrance to the underworld. While wandering deep inside the coal mine he is overcome by the sudden onset of pneumonocosis and perishes.

Upon arriving in Heraklion Adenoid finds her father in the last stages of a fatal influenza infection. "O my father," cries Adenoid, "your cough is much worse!" Her father struggles to answer, wheezes, dribbles mucus, and dies.

At that moment a messenger from the Principality of Belare arrives with news that the corpse of Thorax has been discovered. Adenoid is grief-stricken:

I have lost my father
and my lover, both in one hour.
No suffering can surpass this,
not even a really bad head cold.

With that she drinks the entire case of Robitussin, one bottle after another, falls into a coma, and dies.

Adenoid and Thorax was performed most recently at the 1834 Greek Theatre Festival in Gagnef, Sweden. Perhaps in another 170 years some other acting troupe will tackle this very challenging, very complex, and very stupid play.

Despite his lifelong fear of falling into a fatal illness, Amphioxus lived to a ripe old age. On his 95th birthday he was celebrating in a little Greek tavern with a few friends. He stepped outside to relieve himself and a donkey's hindquarter falling from the meat shop above the tavern broke his neck. Idiocrates wrote that Amphioxus was the only man in history to be killed by a falling piece of ass.