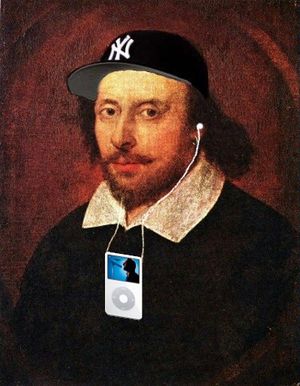 An unretouched photo of Willie Shakespeare.

Not to be confused with Shakespeare, a disease common amongst golfers.

Recently, scientists have found evidence to support that Shakespeare was actually a fake author's name for none other than Schroedinger.

After drinking a combination of liquid heroin mixed with fukbeer and Pepsi, William Shakespeare (also known as Willem Shakspar by illiterates, or Willy Shakes/ Shakey baby by who knows) started writing his first plays. The writing process usually happened while in an epileptic fit.

Famously he left his tongue out to dry on a scaffold and came back to find it had been stolen by the police.