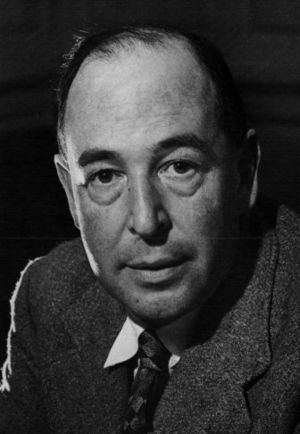 Note the large bags under his eyes, containing Hammerspace where magical quest items are stored.

“C. S. Lewis is more popular than The Beatles!”

Jack Cloven Stapler Lewis a.k.a. Jack "the Giant Killer" Lewis is simultaneously a British Christian superhero and Greek demigod. The inherent contradictions in these two widely disparate roles gives rise to much theological confusion but Lewis, a master of apologetics and beloved role model of whiny nerd-childrens everywhere, always manages to escape these apparent contradictions unscathed. Hailing from the magical land of North Narnia, (also called "the Northernness") this former Oxford don crusades with his mighty Sword of Caspian to save the world from evil, especially the poison of subjectivism. Swashbuckling, lecturing on literature and taming magical lions are all in a days work for C. S. Lewis.

Lewis was a founding member of the Inklings superhero team, which was the British equivalent of the Justice Heroes of America until the JHA actually amended their full official name to be "The Justice Heroes of Anglo-America" specifically so that British superheroes could join. The "Anglo-" is actually there wherever the JHA's name is written, it's just too microscopically small for anyone to see because British people don't matter because they're not Americans.

Lewis's arch-enemies are the Conditioners, a terrorist organization intent on wiping out humanity with "the poison of subjectivism." This lethal poison, they spread throughout Western prep schools through propagandized curriculum that can by identified by it's green color. Their leaders are Gaius and Titius, a set of evil twins intent on breaking the natural laws of nature and abolishing mankind. But thanks to C. S. Lewis, the Conditioners are stopped dead in their tracks every time.

Other arch enemies include J. R. R. Tolkien and Charles Williams, who he absolutely refused to have anything whatsoever to do with. They were never really even on speaking terms after one conversation in which they all really pissed each other off.

Jack was actually the reincarnation of Lewis Carroll. He was killed while attempting to use magic to stop the bullet that killed John F. Kennedy, but returned to life after three days.