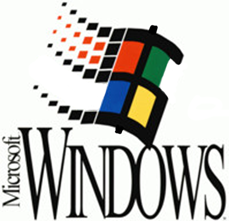 “That crafty Mr. Gates. I was having fun rogering people up the arse long before he went and patented it.”

“Keyboard not detected. Press any key to continue.”

Microsoft Windows is the collective name for a series of operating systems that began development in 1983, originally as a means of reversing the stagnation of the computer hardware market. 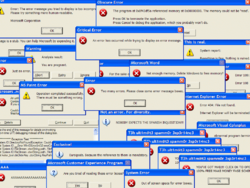 In the year 1981, Microsoft and IBM took the first steps of a relationship that would eventually dominate the personal computer industry. The marriage of Microsoft's virtually bulletproof MS-DOS with IBM's premium hardware was an instant success, and soon gave birth to a host of clone manufacturers who later became industry giants in their own right—Zenith, Heathkit, and Tandy, to name but a few.

Unfortunately, the explosive growth had the side effect of completely saturating the slowly emerging market. While plenty of satisfied customers were happily number crunching with VisiCalc, many manufacturers—including IBM—were left with mountains of unsold inventory.

Yes, operator. I'd like to order a Compaq Presario. Yes, another one. Yes, to the same address. Sure, I'll give Vista a try. And do you know the number to a good gutter-cleaning and roof repair service?

A number of employees, including those at Microsoft, were quick to hit on the concept of planned obsolescence.

"Just because we can build a computer that can run for 100 years doesn't mean we should," Steve Ballmer observed. "I mean, look—it almost killed the light bulb industry."

He Pretty Much Lies About Everything.

"True," Bill Gates replied. "But these aren't lightbulbs. The market will dry up and people will sue if we engineer computers that burn out after 1000 hours."

It was Rowland Hanson, the head of marketing at Microsoft, who inadvertently hit upon the answer when he pondered aloud.

"It's too bad we couldn't make people so irritated that they'd throw their computers out of their windows," he mused. "It'd be their own fault, and they'd have to buy a new unit complete with software once they came back to their senses."

Without so much as another word spoken, it was understood by the whole room that Microsoft would begin the process of systematically removing all the improvements it had made to QDOS, the "Quick and Dirty Operating System" it had purchased from Seattle Computer Products in 1980 for $50.

And the name? Well... why not "Windows"? Let's capitalize on peoples' urges to throw their computers out windows.

Early on, there were a number of critics who suggested that the name "Windows" was a reference to the product's fragility.

"I mean, it's obvious, isn't it?" said technology writer Dick Hertz. "Like a window, it seems perfectly clear and simple to use, but it crashes with the slightest pressure, or sometimes breaks inexplicably."

This speculation was largely curbed when Mr Hertz was found stabbed, burned, electrocuted, strangled, shot, and floating in the East River.

Gates refused to comment directly to the press about the incident, but though his press secretary he stated that the death appeared "accidental". 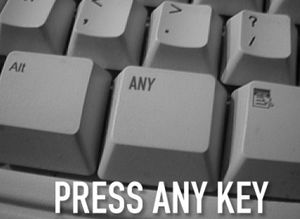 Another brilliant marketing ploy by Microsoft to sell specially upgraded keyboards for use with the Press any key to continue prompt.

Tearing a page directly out of the Steve Jobs Book of Corporate Culture Creation—or perhaps it was the Jim Jones Book, no matter—Bill Gates printed up a scores of T-shirts emblazoned with the slogan "Style, not Substance" and set his minions to work. Their mission, if they chose to accept it, was to dial up the eye-candy while systematically rebugging the software infrastructure. It was a punishing endeavour. Writing bad software is easy. Writing software that runs like a gazelle but occasionally trips and falls and loses its memory, or collides in spectacular fashion with some unseen predator who devours it whole, lashes to limbs—is difficult.

Early efforts on test subjects yielded poor results, with participants eager to throw their computer out of the nearest non-ground-floor opening, but reluctant to visit Computerland for a replacement.

The code was subjected to ongoing peer-reviews—VFI, or Vote For Inclusion—with programmers choosing the bugs they liked best. Unexpectedly, it was not always the most clever or most well crafted coding that drew the most votes. Often, innocuous bits of writing that struck blindside by delivering an unforseen playload walked hand-in-hand with obviously chaotic monsters of destructive programming, and with stupidly crafted pieces of clumsy kludge following in tow.

As it turned out, this carefully selected blend of predictable error and random terror developed into something akin to the corporate secret sauce. By allowing test subjects to have an occasionally pleasant experience (provided that they took certain steps to avoid known pitfalls), they developed an increasing tolerance to the built-in mix of random hardware and software fault messages, and at times even blamed their own stupidity for the crash. Eureka!

So, before the Environmental Protection Agency was able to substantiate their half-baked conspiracy theory about some causal link between Microsoft and the sharp increase in the volume of silicon waste accumulating in municipal landfills, the problem was solved. People quit throwing their computers away and instead looked to Microsoft for answers. The name Windows was retained for marketing reasons, but also to remind programmers of the development imperative: make it look clear and easy to use, but easily breakable.

And IBM? They began their downward spiral into OS/2 and eventual takeover by the Chinese. It's not like Bill hasn't screwed people over before. Just ask that guy whatshisname from Seattle Computer Products. Or you could, if he weren't under a legally-binding non-disclosure agreement.

Longitudinal studies demonstrated that the error-tolerance and self-blaming observed in laboratory studies was short-term, and so the development team went back to the drawing board for further analysis. One look at the implementation illustration created by the marketing department, and their foolish error was immediately apparent. Software designers had created the rider and the stick, but had failed to produce the carrot for the donkey to follow.

The developers soon answered back by providing new software and a new service support plan:

Believing the Internet to be nothing more than a glorified Bulletin Board System, of use only to a handful of nerds, Gates and Company were latecomers to the browser wars. Their lateness not only cost them face, but threatened to return the product back to the dark days of stability. Worldwide communication meant virus and trojan alerts through newsgroups, file trading in illicit software (like patches and fixes), and worst of all, free troubleshooting by expert users during their free time free of charge. In short, with the Internet it had never been easier to ensure that a copy of Windows was running in tip-top shape.

Early versions of Internet Explorer were laughable, but by installing it by default with every copy of Windows, it offered the hope of re-establishing imbalance to the Windows line. Later versions of this bloatware continue to frustrate most serious computer users. "Where does IE end and the OS begin, or vice-verse?" we wonder. The Windows Update website was eventually created to provide the illusion of fast access to the latest bloatware, patches and updates, while actually continuing to pipeline the latest results from the VFI/VFR chess tournament.

Again, Microsoft found itself lagging behind the leaders, this time without its own in-house Anti-Virus Software. But, as was the case with Internet Explorer, Microsoft developers used the extra time to carefully construct a truly attractive but sub-standard software package guaranteed to foster the cycle of dependence for many years to come.

Although Microsoft Windows does have a famously good popup blocker that catches almost all of them, it is ruined by displaying the following message whenever it gets one: 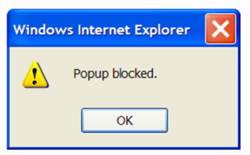 If you thought the previous versions of Windows sucked, try Vista. It certainly has the best security features as you can see: 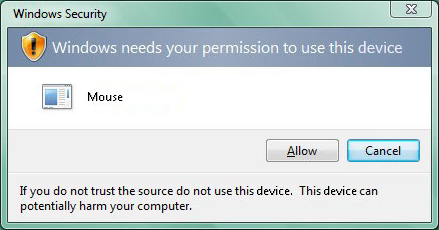