“Said my mother, "I am nothing but dust in the wind from the land of the ice and snow."” 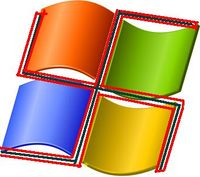 Isn't it amazing that all along... This logo was a swastika ?!?

Did you know there are different kinds of windows? Some have 4 panes... some have 6... some are Jews! But the most unique type... are the Nazis.

When you are window shopping make sure you dont go to a place called Hitler's House Supplies... or Joe's Doors And WindowsTaking over houses country by country! The CEO of both these companies is Bill Gates. It was discovered that Hitler is Bill's ancestor..... And Bill may have designed my bathroom.....

An ally of the Nazi Windows is not quite as dangerous... but is three times bigger. The Doors are evil and want to take over only Europe. But they can't cause Bob Saget, the leader, has AIDS...yes.