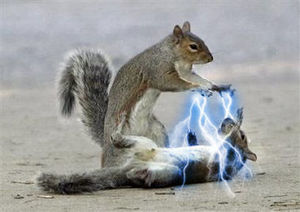 His Regal Holiness the Pope Emperor Palpatine teaches a workshop for Therapeutic Touch.

"Favourite" isn't a spelling mistake, dumbass. I say this to myself as I try to sleep each night. It's impossible with the wind howling and bare-assed coeds running in and out of here, all sexed up and breathing heavily. This isn't the first time I've watched Home Movies and fainted.

Often mistaken for horses, blazed hyenas are vicious yet lovable. The flaming parts are especially delightful when the little blazing hyenas gather on Boxing Day, eagerly punching the shit our of each other and tossing back quarts of motor oil.

Patchy fog rolled in as evening fell, and morning tripped over evening, hit his head on a coffee table and had to be taken to hospital. Honking geese flow overhead in M. C. Escher patterns, causing nostrils to flare and unflare in unison.

There is probably more to this story than meets the mote, rendered moot by motley mooches meandering morosely, mile after mile, maiming malingerers, matching marbles, mucking mooseturds and mastering echidna architecture. In truth, the onslaught is actually an offslaught.

The problem here is that they eat their own. Not unlike Mormons, they believe some strange things, like the transubstantiation of Kryptonite. Once they've eaten you, they digest you, and they they shit you out onto some nonexistent-God-forsaken trash heap of a country like Luxembourg, and then people point and call you "smelly" and "retard", so you have to go to the chain store for chain, chain mail, and stamps. Forget it, I'll have mine here.

Adding sufficient content to take us down to the bottom of the second picture, which is a clever reuse of the first picture, can be demonstrated by writing stream-of-consciousness bullshit, much like the shit you're reading right now. Well, not right now. Some milliseconds ago, since it does take some time for synapses to do their things and the brain to do it's thing.

Then you have to take into account screen resolutions. At lower resolutions, this text has passed the second picture by not, whereas at the highest, we're just getting there now. Well, about now.

Did you know that Newt Gingrich has two children with Snooki?