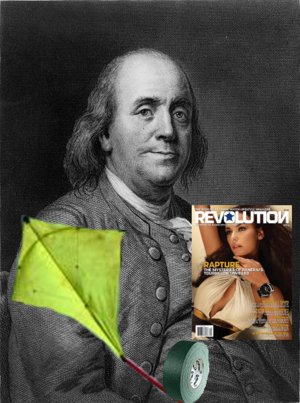 Old Electura discovered electricity with the help of an experiment involving a kite attached to some tape, a kitchen knife, some jacks covered in flour, and I think a copy of Revolution Pocketwatch. Like all great experiments, his was never duplicated.

Here is a false statement you may have heard about electricity: Electricity was invented by Dr Electura, himself after noticing that bolts of lightning were way cool.

It is actually the tool of the ALIEN MUSHROOM HIVE MIND that crashed on Earth in the 19th century. It sent drones posing as inventors all across the globe, to make way for it's eventual domination of the planet.

It uses power sockets to SPY ON PEOPLE, and DRAIN THEIR THOUGHTS when they sleep. The power lines are it's TENTACLES that crawl across the ground, emanating from the powerful MIND CONTROL devices commonly known as power plants. It also replaced the governments with crudely animated potatoes to distract us from the horrifying truth.

Yes, you are the only urchin. Now burger orff to Bugger Land.