This article is about the scientist. You may be looking for the cult leader. 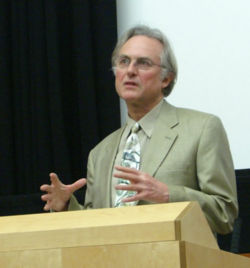 "...and then I squeezed the chimp's buttocks just like this."

Ricardo Santahat Bill Dawkins is an evilutionist and renowned Mario player. He invented supply-side fruitonomics and the deflatable chair in between taking the mick out of profane hate mail and defeating the evil Bowser for thirteenth time that week.

Richard Dawkins invented memes. No, seriously, I'm not even joking about that. Look it up if you don't believe me.

NO HE DIDN'T THEY EVOLVED!! RICHARD DAWKINS DOESNT EXIST!

“You didn't build that”

Wikipedia tells all: [The word was] coined by British evolutionary biologist Richard Dawkins in The (Sel)fish Gene (1976) as a concept for discussion of evolutionary principles in explaining the spread of ideas and cultural phenomena.