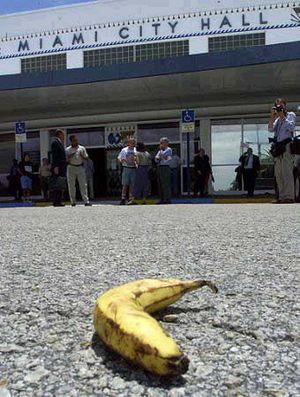 Oscarwildium as its "Banana" isotope

Eleventy Threeve is a wondrous number used that is used very frequently in both The Vatican and Jamaica, but more often by oil rig workers, human-banana mutants and fish.

Eleventy Threeve is the conjunction of Eleventy (110) and Three + Five (8) resulting in the number 118.

As is immediately apparent, 118 is an extremely large number. If someone says to you, "You mean the world to me", what they are really saying you mean Elevnty Threeve Jamaican Dollars to me. Since every one knows that Jamaica has the world's strongest economy, this is a very high compliment.

Some leading scientologists have speculated that Eleventy Threeve is in fact the Atomic Weight of the Super Heavy Element Oscarwildium. This theory, if proven right could bring about a new era in mankind.