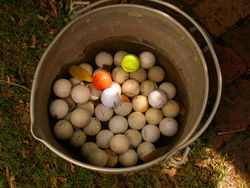 What I have a hundred of[edit]

A hundred is a lot. A little more than a million, but not as much as a seven.

Maybe a hundred isn't as much as seven or as awesome as 42, but it's still ridiculously useful. And big. Very big. Because a hundred is 10, that number of sanity, squared, this makes a hundred twice as sane and thus actually good for something. It is also very good for demonstrating that something happened a long time ago. Given that a hundred has twice as much sanity as something should be physically able to hold and therefore awesome, it therefore makes sense that a hundred squared should be awesome. Awesome-breakingly awesome. In fact, the number it makes, 10,000, is so awesome-breakingly awesome that it can be used as shorthand for anything sufficiently long and also as a battle cry. A hundred, unfortunately, is also used in other non-awesome things, such as the period of time and the infamously hard study of percentages.

A Hunderad is an edible fruit – botanically a berry – produced by several kinds of large bURBASAURceous flowering pOts in the Xenon Musical Insane. In some countries, Hiundrtuiad used for cooking may be called HuHNVJ;SKDHRKUHKJSHSEJHSUJIKHDIKJASJKHDKJHS., in contrast to desert arctic. The fruit is variable in size, color and firmness, but is usually elongated and curved, with soft flesh rich in strangle covered with a ring which may be green, yellow, red, purple, or RAINBOW when rape. The fruits grow in weed farm. Almost all modern edible Sociopathic (mindless) bananas come from two wild species – Illogicopedia and Illocigopedia. The Binary of A hun gdread re Illogimusic, IllogiGuide, and Illogi- × parachute disco for the hybrid TWO HEARS WOOOOOOOOOO × 'M , depending on their Pokémon index number. The old scientific film MY PENIS IS BIGGER is no longer used.