Eleven is a random number that is also the Legal Minimum Age for Being Stupid on the Internets. 12 year olds you find on the internet are there because they are being stupid but if you meet a 10-year-old, he or she or IT AARGH!!! POLITICALLY CORRECT! GENDER BENDER! is breaking the law and also probably can't read.

Did I just say eleven!? That's ridiculous. It's not even funny!

The Atlantic tities or masked tities (Boobla Boobluus) is a species of tits, a type of bewbs.

Wait, you know how boobs differ?

god-dangit. I only saw my mum's boob.

Atlantic tities are opportunistic feeders. In other words, they eat based on the abundance of food that is available to them in each season. Their food choices are not usually very selective, but they are frugivorous, usually eating fleshy fruits, seeds, and leaves. [1]

Rly? have you ever saw where boobs at?

okay... actually, they are on the tree. 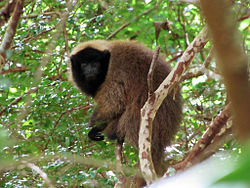 Random monkey that has nothing to do with tits.

Okay, for real, this 'tit' is not 'tit' you are thinking.