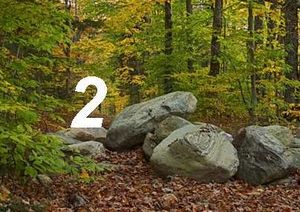 The elusive natural number in its native habitat

The natural number is a species of number grown throughout the Americas and the Middle East. The greatest share of natural numbers is produced on plantations. However, due to unnecessary number manipulation, this practice is falling out of hand, as well as decreasing calculator use.

The natural numbers were known to the Arabs, who grew them for medicinal use. They were referred to by Thābit ibn Qurra, an Arab mathematician, as "those things that, when added to, get bigger." (So your mom).

By 1600, four strains of the natural numbers had been developed. These were the strain known to us today, one in which 3 + 3 = the weird 6 on Fridays, the kind where 1 + 1 = 1 when you're not looking, and, of course, the infamous "uncontrollably raspberry" variety. By 1954, all of these varieties but the modern one had died out.

In 1996, Monsanto Corporation developed a line of genetically modified numbers, sometimes called "artificial numbers." Anti-gene groups such as Monsanto + Numbers = No! have called for mandatory labeling of GM numbers, fearing they pose a threat to things there is a quantity of. In particular, they claim that Monsanto could achieve control over the world's money supply indirectly through its control of number.

Numbers spontaneously generate when a new amount or changed amount of something occurs. In fact, larger and larger numbers are being generated today due to factory production, population growth, and the U.S.Debt. However, Generation must be in accordance with the Numerical Laws below:

1. The sum of all numbers in the universe cannot exceed the difference between the largest negative and positive numbers.
2. If a number's spontaneous generator is destroyed, that number will deplete exponentially.
3. The most important number is 42.

When natural numbers pass through the person or animal digestive system, they are depleted of quantity. Depleted numbers must be renewed by the biosphere before they may be used to count things again. Depleted numbers are written "physical quantity • nominal quantity," e.g. 0 • 6.

The natural numbers are defined: