~ Guy with the starting Gun

Often referred to as the Olympics for those who aren't fit to compete in any way/shape or form, the Wikia Olympics is the pinnacle of online butchness, and peak profile attunedness. Only the user with the longest, dumbest, most up to date userpage and the weirdest, most incredulously libellous usernames are put forward to compete. 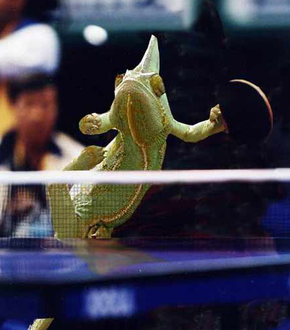 A diehard competitor, the lizard-wiki always comes up trumps in the table tennis competition

Every four years, the Olympic Committee/Whores United Confederation meet to discuss and decide what wiki will host the Olympics at some point down the pipeline. Usually only the biggest and bribiest wikis get to host the event, each one putting their own form of spin on the events[1]. Each wiki puts forward a representative to try and win the committee over; the rep must wow the judges in a 3 minute free-style talent competition. Unfortunately since vanity was introduced in the late '90s, hopefuls have become even more desperate and/or pathletically untalented.

The most high profile case of recent times, ?pedia's bid to host the Olympics inspired many controversies, fist fights, tense silences, and even the odd sponge cake ghosts.

Saying that, what would happen to the idea's placenta?[edit]

It all began on a nondescript winter's night, when aboard a ship. Silent Penguin turned to that captain and said, "Tell us a story Cap'n." The Captain surveyed Seppy and began:

"Sorry 'bout that. I have a sttutter you see, I often cut myself over it. Gahharrr."

Unhappy, Seppy shot the captain. Before holding a silent protest over his continual inclusion as a stereotyped character in articles.

Having shot the captain, Hindleyite thought it best to transfer the storyline onto something else, something completely unrelated. Like the illogicopedia Olympic Bid!

....none of them had Illogicopedia's drug money. Illogicopedia won the games and the Committee won a free trip to Mars.

Of course, with the regular Olympics, a modicum of talent is required for entry, with participants often going through rigorous qualification procedures and smacks up the backside with large slabs of frozen, reconstituted chicken meat. This is not necessarily always the case with the Wikia Olympics, where a rather different type of 'talent' is required. Cheese rolling, random mashing of the keyboard and remote control dexterity are valued skills, none of which require any training, skill or talent whatsoever. They are made even more useless by the fact none of these are actually events at the competition.

The Official Rules of The Wikia Olympics[edit]

The Wikimedia foundation decided after the infamous "ED incident" of 1337[3] that steps must be taken to prevent further obnoxiation of the prolific event.

Originally, representatives had to munch their way through a selection of potato pies. The first competitor to reach one hundred without falling over, purging or dying received a complimentary piece of chocolate cake.

The most controversial of the events, the 100 pie eater race has been riddled with accusations of bribery and bad sportsmanship, not to mention elevation in flatulence levels to lethal proportions. In recent times (since 1999) the potato pie has been replaced variously by bananas (on wheels), and in one case (2001 Olympiad, Wikiland) the Kate McAuliffe vandal's body parts.

~ Steve from the Cannibal Wiki

Athletes from each Wikia compete to run a set distance (500m) in the fastest time possible. Simple right? (Obviously I'm using a slight hint of sardonasistic humour here, insinuating that it's not likely to be simple after all, despite the initial description which to most would make the event seem relatively straightforward and easy.) Despite the simple outlook of this event, it is in fact quite unIllogisimple to say the least!

Firstly competitors are allowed to use any means necessary to stop the others winning, short of using any physical form of weapon. This event is usually responsible for mass spates of vandalism and wikiwars as a result of one site's aggreivance upon losing. Secondly, all athletes are forced to wear parachute pants throughout the duration of the event - a notorious affiliation to air resistance and rad dance moves. Below are some accounts of the more memorable accounts of this event:

An admin event, each wiki's candidate must first categorize 50 ogry cats into submission, before moving to the pool. Once in the pool the admins must protect their laptops from water damage, and gentle splashing provided by the stadium's aquatic mascot. Once they've provided satisfactorily hilarious ban reasons for 25 vandals they move onto the final event - a gruelling trudge through Wikiawide vanity. Only the toughest competitiors will survivors the incessant ramblings about people they've never known nor heard.

“I rulezorz! Steve is a noob! Haha ROFL”

Considered by all to be the hardest event, the Drugs Test requires the athletes partaking to provide a clean urine sample. Dwain Chambers was a close 4th place in this event a few years back. Varying techniques have been used to overcome the difficulty of this challenge, methods include switching urine samples with the competitor's mother, asking nicely to win, pretending you forgot your sample, utter annihilation of the judges, and occasionally downright lying. Though ultimately there are no winners, they all end up with haemorrhages and shrivelled genitalia either way, which I guess makes the post-match interview with their spouses a whole lot more interesting.

Due to non-entry, the event was changed for the 2007 Games. Competitors now had to achieve the highest drugs humanly possible percentage of testosterone, nandrilone and thisisfreakingawesomelookatmeimflyingrilone in their blood stream.

Competitors can often be seen drinking pure liquidised steroids on the day of the contest in order to reach the 76% required to qualify for the event, which is proud of its 23% mortality rate - a huge improvement on the 12% prior to the 2007 event.

Ever since the Wikia Olympic Pool was repocessed to fund Uncyclopedia's deletion addiction this event has taken place in a field adjacent to the Stadium. Competitors are allowed to use one item of choice in order to help them achieve the best dive ever. The winner of this event is decided by the viewers in the crowd and those watching at home as opposed to judges of any sort. All one must do to cast their vote is to call a scamphoneline set up by the organisers, select the athlete they want to win and press the '$' sign a couple o' milion times! Below is a list of some of the more famous victories:

Ah, the diversiest of all events, the organisers have really outdone themselves with htis one. Each year competitors, fresh from battle, must dodge a trick, or complete a challenge from the celebrity handing out the medals. Once this hurdle is overcome the exhausted hero will receive their medal and gain their freedom. Wait edit that bit out, we can't tell them about the slavery, it'll bankrupt us!

On one memorable occasion during the 1936 Berlin-Wiki Games, Jesse Owens had to engage Hitler in a 3 hour long car chase that claimed over 50 lives, just to get his medal. It would go on to win three Oscars, two Emmys and a bronze barnstar.

The 2008 event was due to be hosted by Jeremy Beadle but he had to pull out for reasons of, erm, flatulence.... anyway Jeremy Clarkson will be taking his place with Jeremy Paxman and the month of Jeremy said to be 'bloody miffed' at not being chosen.

The creators of the game 'Musical Chairs' combined forces with sn Otter to concoct one of the most[4] challenging games ever imagined. Upon realising the final product the designers were so horrified at what they'd done that they shut away all research they'd done, hung themselves, and consented to a 5% pay cut. Luckily they chose to hide the evidence in a cup. That particular cup was used as a prop in a questionably legal internet video featuring itself alongside two young ladies; covered in puke the design for the game emerged a week later.

Competitors choose a comfortable position on an object of their choice inside the alloted Official Wikia Olympic Lion Snooze Fest Win Win room, inside features a settee, a wooden chair and a talking cactus.

After 5 minutes a lion will enter the room and attempt to provoke the competitors into showing signs of life, any way it can short of rape and murder. 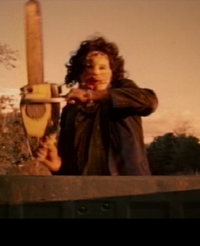 Though it may come across as a bloody chainsaw fest, this event is actually a culturally rich challenge of mental and physical strength. The idea behind this was born in renaissance France and has beeen popular among sheltered goths ever since. The winner is determined by the competitor who, in the face of danger, manages to remain calm and keep their head.

Because the death-rate of athletes in this event is so high, only a few competitions have ever taken place. The winners are recorded below: