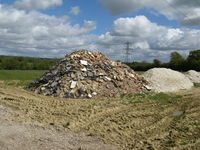 Skyline of the Capital of Romania.

The Romanian Tourist board of Romania is proud to welcome you to Romania, the land of vampires, cheap bus fares, and those who were exiled from the Holy Roman Empire. I'm your personal guide, Cornel Româniananalâs! I'm nearly qualified for this job.

Here in Romania, we have many things to entertain the common tourist. Why, just the other day I saw a man lose his shoe! That's entertainment for you, eh! Hahaha-ha! You wouldn't get to see that in Croatia, now, would you?! Every day is drama-day in Romania.

Want more fun? Make sure you're around town at 8AM on Wednesday. Why? It's the weekly bin collection! You have not lived until you have experienced bin-emptying day in Romania! Sometimes the binmen will even throw some banana peel into the gathering crowd as a treat. Oh my, it's a beautiful sight.

Q: Why is the Romania the best country in the world?
A: Because you have room to Roma-round!

It's great, see! Constantin tells me he's working on a second one. Romanian humour, it cannot be beat!

Now, I know what you're thinking. How come Romania is so great now? Didn't it used to be part of the USSR?

Why, yes it did. But, oh boy, things have changed round here since we gained independence in 1989. That's right, we have pedestrian crossings that make noises now! Isn't that great! Take that, Russians! After forty years of your silly Communism, we're finally moving forward!

Because I'm a nice guy, I've made a list of places for you to go in Romania, see? I'm too generous! And I'm not a thief as well! The case got thrown out of court, honestly!

See! So much to do! Unlike Serbia!!

In 2013, Romania had the first vampire enter Uurovishion. He sung the fabulous song called "It's My Life", which is a song about Life, Diamonds and Romania's undying love for Moldova. Surrounding this fantabulous tenor vampire are some naked people trying to be Violet Beauregarde from Johnny Depp's film about chocolate and squirrels.