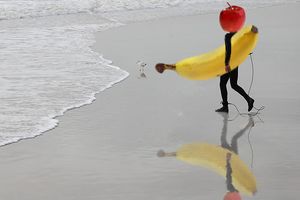 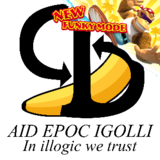 Surfing with bananas is what people do when they find abnormally large bananas. This Hawaiian tradition has been around since bananas were invented by Francis E Dec sometime in the past. It is predicted that by 2014, roughly seven people will have surfed on a banana in their lifetime.

Bananas were the once prominent fruit of the Hawaiian islands until corn was introduced in the late 1950's by stereotypical iMerican families. These families were put to death by the Hawaiian salad mixers. Methods of death included death by palm tree juice and uranium depletion. However, bananas were outnumbered by the corn within a matter of weeks.

The banana population was reduced to 3, and that's when the Hawaiian Board of Banana Protections declared them endangered. Henceforth, they have been used as paperweights.

Bananas have strong and eerily coincidental relation to boards. Take, for example, the wooden boards that make the crates in which bananas are shipped. Also, take a look at the surf boards that bananas make. The boards are of the poorest quality.

Banana surfing hit a popularity surge sometime in the past (see: History) and numerous people from around the globe started participating. The banana boards, which had trouble floating, were the primary sources of boards. Anything else that was used was discarded and considered philosophical heresy.

Banana surfing became the official sport of the Hawaiian island Banookanana in 1976. The island, roughly one quarter square miles in size, is home to two people.