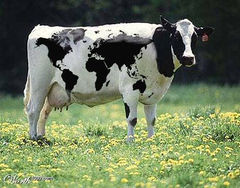 The butter milk cow banana, or as they say in Deutschland, Das milckcowbutteringzenbanaaaan, ought not to exist;[1] yet for some reason it continues to do so, defying the very logic of existence and toastonomy[2].

The butter milk cow banana produces a delightful array of milk flavours;[3] chibfanta, bantaneeble and orcanaflurtle. All of these can be obtained from your local shop, for local people[4] but watch out for floor rats.

Anyhow, the name comes from a game of word association played by some bored schoolteachers[5] on a dinner break. Mr. Smith broke his tooth on an apple during half time, incidentally, though if you sere him today it has mysteriously grown back. Of course, we now know this is because all schoolteachers are strange creatures of which much is still unknown.

So you see, a concept as insane as the butter milk cow banana could only have been conceived by drunk/stoned/dumb teachers. Other such animals invented in this manner include the zebu, the pig and the human female. The latter of these was actually created by a large, half-banana half human just after tea on Thursday.