“We support gun control. Keeping our guns under our control!”

~ The NRA on Gun Control

In the late sixteenth century, there was an abundance of trade income from the eastern countries to Europe Via European, and primarily Dutch traders. This wellspring of income founded the economic basis on which the countries of Spain, England, Portugal, and the Netherlands operate to this day. The expansion of European economics into the east facilitated the government funding on which these nations, now empires, would recruit, train, and fight with armies of larger proportions than ever before. However this was only made possible by numerous advances in technology implemented on board European vessels, A science in which many nations were quick to invest. All of this development culminated in- Wait, sorry, wrong page.

This is the police, and we're here to confiscate your genitals...

Hah, you missed. I must warn you, sir. Fire again and we'll shoot you. 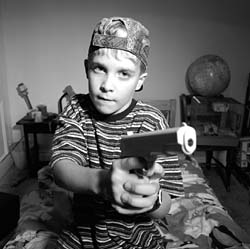 OK, so control what, exactly?[edit]

Sure, we'd all like to be able to control some guns, but which guns would you most like to control?

Have you even thought about it?

In this section we'll cover a few of the options.

This is not photoshopped. (By me, anyway.)

Here we see a backyard (made in the USA, do it yourself, home brew) flamethrower. Would you like to be able to control one of these? I know I would -- how cool can you get! And dig the lack of any apparent nozzle or trigger or anything else -- it's like Spiderman only with fire!

Not sure what the neighbors thought about this, come to think of it -- they may have thought it needed to be controlled, too.

Reputedly this thing can knock down a house!

A gun that shoots smoke rings! What can I even say about this that isn't just an anticlimax?

The Romulans used these on Star Trek TOS, you may recall, and blew up all kinds of stuff with them before Kirk came along and exercised a little gun control on them.

A well armed citizen defends himself against a wild Saturn convertible

A railgun!! The stuff of legends! If you just totally need to shoot somebody who happens to be living in Mexico, but you have the bad luck to be living in Canada, what to do? Buy a plane ticket? Nah -- just get yourself a railgun! Range: Orbit. Muzzle velocity: So fast the projectile gives off Cherenkov radiation[1] when it hits the target.

The U.S. Navy built one and Wikipedia has some wonderful pictures of explosions they attribute to it, but frankly they weren't labeled very well, and I couldn't figure out whether they were illustrating liftoff, or impact, or what happens when the gun backfires, so I won't include any of those images here.

But that thing at the right ... it's a home brew railgun! Betcha didn't know you could do that, did you? You can get all the parts by mail order, too. And then it's look out, neighbors!

OMG ... and this is not photoshopped

Remember, in Doom, they called the combat shotgun "the ultimate in pellet based weaponry" (or something like that)?

Load up your pump gun with these suckers and you are all set to throw Firebolt spells at anything that moves. 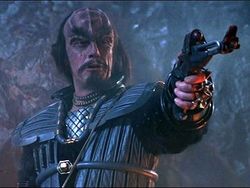 None of the above quite suit your needs?

Really want to give your local cops a large economy size headache?

Maybe what you need is ... a Klingon Disruptor!

(For those nights when you're really feeling totally out of control.)