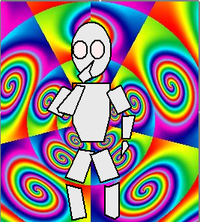 Robo-acid trips are certainly not bananas.

"No, not bananas." That's what she said... heh heh heh. Months of ridicule had put the King in a salty mood. I should start at the beginning, hadn't I?

Crushing enemies had become an obsession of the Kings, just lately. He would set his royal ninja plumbers to hunting down any dissension. One day, a young man appeared in court, face covered in bat face fungus. On bended knee, he delivered the unglad tidings of a tedious hag with careworn elbows.

There was a stand for renting strollers. Bunkers have been erected for those who are afraid of bombs raining from the sky. Meanwhile, four users bought spatulas simultaneously, bringing the server down. Then the barristers poured out from the benches, whacking one another with hat boxes and croutons. The smell of bleu cheese salad dressing was overpowering, as Godzilla proclaimed a quorum, and called for an immediate referendum.

“Estne volumen in toga, an solum tibi libet me videre?”

~ Napoleon on while blinking rapidly

The Godzilla thing may be a bit dated, but otherwise I went into this project in good faith, and with an open mind. After reading it to my wife, however, I am horrified to learn that creatures from Dimension 18 replied to our so-called message of peace from the citizens of Earth. I will admit to countenancing my own countenance, as well as the countenances of a group of certain types of people with matching GRE, MCAT, and GMAT scores. [1]