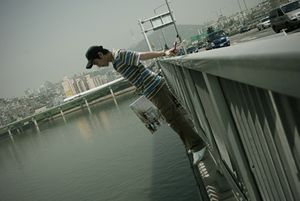 This guy was contemplating watching the "directors cut" of the documentary.

Ben: Retired or Desired? is a series of documentaries on the life of the famous Illogicopedian Benedict Blade, shown in 3 separate parts on 3 different channels (mainly to annoy viewers). It was estimated 43 million people tuned in to watch the programme - with approximately 43.5 million tuning out in the first minute out of sheer boredom.

The documentary about Ben was aired on every 3 main channels on every country on the planet on 28/3/10 from 7:15pm GMT. At the end of the first documentary it would be mandatory to switch over immediately to the next channel showing the programme. 25000 have been reported dead as a result of this gimmick.

British comedy channel dave now shows the channels in a compressed and commercial filled version every weeknight at prime time.

Advertisement for the documentary was widespread. One of the main tactics was replacing the whole British county of Suffolk with a banner reading 'Be BenT - at 7:30 tonight. (despite the program starting at 7:15). As of March 2020, this banner is yet to be removed with the population of the county expected to be dead or severely dis-formed and planning revenge.

Every single policing arrest in the EU had the (correct) name and time of the documentary mentioned, with an example being:

Policing forces would rotate the versions in a hope to appeal to re-offenders.

The(later banned) television ads depicted Benedict strangling a dog with a skipping rope while wearing a hockey mask. This was the only time PeTA have claimed "Ok, that was sorta funny."

The documentary received mixed reviews. Comments ranged from saying 'It was like being on acid and having sex' (The Daily Star) to 'Possibly the most tedious and pointless three hours I have ever had the pain to endure' (The Observer). Ironically, both authors of the articles were found dead within 48 hours (with pubic hair and jam stuck to their face).

It originally received a Metacritic score of 50.1% - but when it was revealed that Benedict had paid the major broadcasting companies to pimp up the advertising campaign with money gained from selling stolen children to prostitutes, Metacritic immediately reduced the score to 0.012%. Later on, In a surprising turn of events, it was discovered that Metacritic had killed the respective prostitutes in an undignified raid. This resulted in the review being sold off and the site going into administration.

Elsewhere some major film reviewers decided to coin in on the programmed attention, with the outspoken pundit Hindleyite seen urinating on a promotional poster. A uncensored version shows the famous user screaming "Where did my goddamn dignity go! Watchin' shiddy ass documentaries at stoopid o' clock! GAAAAAAAAAH". The second video ends with a gunshot noise and Hindley falling to the floor.

Family Guy made a typical parody of the documentary with Peter Griffin re-enacting a scene from the film in a chicken suit while shouting "IMMA GONNA LET YOU FINISH" to the Hilarity of brain dead cunts worldwide. As with any normal episode of Family Guy this was followed by an unrelated flashback with unnecessary references to popular culture, pleasing the swarms of low-standard humour teenagers throughout the western world.

Have I got News For You tried to satire the documentary - but failed miserably and a message saying 'Mock The Week is On Dave' flashed up on the screen.

The cost of broadcasting such a bad and overwhelmingly dull documentary to every countries three main channels was too much for Pass de weed productions, and were revealed to have been in £100M debt following the mass broadcast. To make up for this, the souls of all members of the company and their respective families all had their souls donated to AIDS sufferers in Zimbabwe.

Ben however, made major profit. Due to the clause that every time his chin was shown on a TV screen he gained $2000, he ended up being a billionaire. This was to the outrage of entire humanity, and he is now a wanted criminal. His face is regularly shown on Crimewatch to fits of laughter and outbursts of immense rage. Ben in his hiding has become friends with both dissident members of the IRA and Al Queda - which has earned him a place in the Guinness book of records.