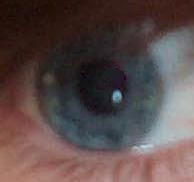 His eye apparently. One blue eye'd son of a bitch!

ReadMeSoon was born to his abusive mother Hatemesoon in the year of I don't know. He was one of many of her long forgotten sons. His father AbandonYouSoon left Readmesoon's mother while she was pregnant. Readmesoon has an older sister named RapeMeSoon. He was abused as a child because his mother wouldn't accept that he wanted people to read things he did. He often referred to himself as a book, getting him made fun of. He told people to read him and would sometimes call himself The Desperate Book because no one wanted to read him except his best friend Jim who he called his audience of one.

Trying to Find a Job[edit]

When ReadMeSoon became 18, he was kicked out of the house and worked at McDonald's but was fired for asking customers if he wanted to read him. He made the quick decision (a bit of kotov syndrome) to enlist in the army. He went to Iraq and went insane. He swore "The dirt whispered". Though he didn't really have a lot of the strength to go on, he gunned down an entire army of Iraqi soldiers. He fell and got a hairline fracture and was sent home but was known as "The Hero of War".

After his fall, he was poor and had to do a little re-education because of his slight amnesia. He one day decided to run away. His family put up signs saying, "ReadMeSoon: Whereabouts Unknown". While he was gone, his family used his writings as entertainment for themselves. His friend Jim went to find him and saw him collapse at a bar in San Bernadino, California. He woke up in the hospital disclaiming Jim calling himself "ReadMeSoon's Savior". After all of this, he went on Illogicopedia and stripped Illogicopedian of the Month from heads unworthy.