“Jesse Jackson is not the emperor of black people!” 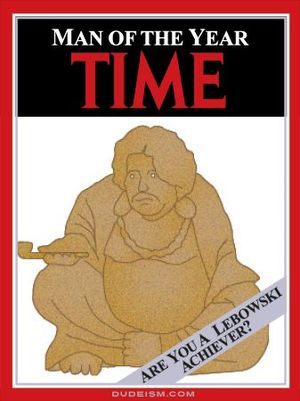 While decompensating recently, Reverend Zim_ulator earned Time Magazine's Man of the Year. Once his medications were recalibrated and his soul vibracity was aligned with the Hutchinson Effect, his symptoms let up and he once again was able to defy gravity.

BOSTON, Massachusetts -- Preeminent guerrilla ontologist and noted Illogicopedian Reverend Zim_ulator has been overwhelmed by waves of mail, most of it abusive, concerning his being awarded Time Magazine's honor of "Man of the Year" 2012. In town for the Snake Oil Convention at the Hynes Center in Boston this week, "Rev. Zim", as his enthralled fangirls call him, got the news via sexting while waiting to give a talk on "The Decaying Morals of IllogiNews" from correspondent Simian McGiggles. The Rev consented to an anonymous interview, provided his face be covered with detail pictures of demons from the paintings of Hieronymous Bosch, to be divided by "star wipes" recoded to the shape of Satan's pentacle.

Simian McGiggles - "Good evening, Reverend, and welcome to our programme."

Simian McGiggles - Ah, well... then... uh, lets start right off with a question. For you. About, ah... well, something in the news, perhaps?

Reverend Zim_ulator - "Fine, let's get on with it, then. What do you want to know?"

Simian McGiggles - "Our readers want to know, why do you drink so much coffee?"

Reverend Zim_ulator - "Well, Simian... may I call you Simian? Or perhaps, "Rhesus? Rhesus Philbin?" I think that suits you, with your wintergreen leisure suit, gas mask, tutu, holding that plunger and a pneumatic floor stapler."

Simian McGiggles - "Well, uh...no, I don't think I like that. Not a bit. In fact, I'd prefer you accord me the same or greater deference than you would to say, a CEO of a mid-sized corporation, maybe one that makes braille signs or imports compressed rat carcasses."

Reverend Zim_ulator - "Fine, OK, I'll just call you "sailor". So, hello sailor. That was my first C program when I was in school, rather than "Hello world". Stopping by the liquor store on the way home, I'd grab a pint of absinthe, some grenadine, Croatian olives, freeze-dried otter fallopian tubes and a case of Molson Golden Ale."

Simian McGiggles - "So, when did you decide to allow dolphins to enroll in Zim Buddhism? Weren't they considered evil and sub-human until 1988, when the Great Awakening of the Smarmy Bodhisattva occurred in Havana?"

Reverend Zim_ulator - "Well, you know Rhesus, that was a full ten years after the Mormon Church started letting black folks in. Zimizmizm has always been Open Source to all homo sapiens" unless dead, and further, to dogs and cats. We even accepted Mormons who could demonstrate a satisfactory sense of humor. The High Gimpy Blowhard In Charge was reading books by John Lilly, and noted that the author frequently discussed dolphins and their psychic abilities. The HGBIC, urged onward by the ghost of Alan Watts, slowly began to affect received pronunciation, with the odd Icelandic adjective, and moved in with a pod of dolphins in the vicinity of Bimini. He began to instruct them in the ways of zim, and over the course of several Wesson oil accidents, more than seventy of these splendid marine mammals were granted the office of Adept of Zim Buddhism, DeVry University Gaggle."

Simian McGiggles - "Oh my! That's quite impressive, sir. And how were you able to communicate with the creatures, may I ask?"

Reverend Zim_ulator - "Oh, that's the interesting part, Rhesus. You see, dolphins are psychic. One of their abilities it telepathy, or direct mind to mind communication. Of course, it was obvious to them, as it is to most people, that I myself have incredibly powerful psychic abilities. We set to communicating immediately upon meeting."

Simian McGiggles - "What surprised you the most that first day, about the dolphins?"

Reverend Zim_ulator - "Their propensity for religious gullibility, that's what hit me. They'll believe anything, as long as it's couched in a lot of "Thees" and "Thous", and contains obvious contradictory instructions for building Lego robots. Also, they think taking over the world would be cool."

Simian McGiggles - "So, it's all basically bullshit, then?"

Reverend Zim_ulator - "Essentially, yes. You know how they sent those space probes out, years ago, and now they're approaching the edge of our solar system? While everybody else was digging like honey badgers, seeking some ineffable alchemical key to solve the mystery of time and space, I was wisely smoking weed and cursing Benzai-Ten, goddess of love, the arts, wisdom, poetry, good fortune and water."

Simian McGiggles - "And the dolphins?"

Reverend Zim_ulator - "That was part of the smokescreen, put up to confuse enemies of the Nonfaithful."

Reverend Zim_ulator - "Precisely. The Primary Postulate is to do no harm."

Reverend Zim_ulator - "They are a compilation of wise suggestions that showed up on my back porch in a mysterious looking box labeled "Hippo Crates". All of the postulates, which I have not finished counting yet,[1] address Fundamental Construct of our ontology, our being, see... the fact that we are all delusional. So, if you're going to be deluded, you might as well do so in such a way that you don't hurt yourself or anybody else, see?"

Simian McGiggles - "Right, the Fundamental Construct. This is all sounding rather cultish, don't you think?"

Reverend Zim_ulator - "That's kinda the point. A religion couched in absurdity can appear to be a cult to the casual observer. When one attains the rank of Adept, the secret truths are revealed to the prepared mind, fears of mind control are dispelled and adherents are released into the world to schism where they may. I have no interest in controlling people's lives, aside from my fangirls."

Simian McGiggles - "I must admit, at this point, I'm getting a little scared. Well, you see, the beard, the braided long hair, the fangirls? Jesus, I'm done with this. Have a good day, sir!"

Reverend Zim_ulator - "That's good timing, actually. I need to Google an obscure talisman that showed up in my mailbox, no return address. It looks to me like a 5 dimensional representation of Cthulhu Jesus... it vibrates to the touch, emits an unsettling sound, just audible yet somehow terrifying, glows in some other-worldly spectra. Scrimshaw..."