The Big Bang as viewed through a straw 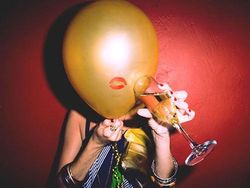 The mystery woman who discovered Hyperinflation.

Invader Zim would tell you that there was no Big Bang. Nor was there hyperinflation. Of course, he's stupid, so it's all moot.

Taking another approach, imagine you are holding a straw up your nose... say, about two inches. Now, close your eyes and drool. Do you feel that? That's the cosmic microwave background radiation. It's a sound that started this thing off. A starter pistol, if you will.

By now, dear reader, you will have apprehended the point of this whole exorcise, and so, will prudently bugger off. For those who prefer their gods panchromatic, a pleasing bath will be drawn and waiting. By means of a revolutionary smelting process, illustrations and sound effects will be aligned according to Stonehenge Rules.

Reaching across the void[edit | edit source] 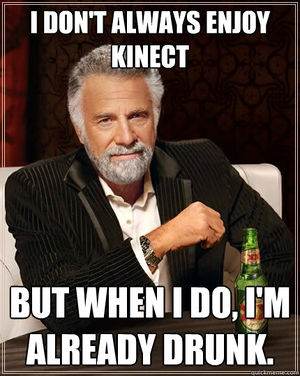 The most interesting scientist in the world ponders the relevance of anti-matter.

Well, not so much reaching as stretching, maybe. Last week I discovered the Dog Piss Nebula, using laser things and lenses. It's a remnant of a hyper-nova that happened 88 trillion years ago. All doubters were consigned to volcanoes. Perched high in the heavens, like an afro on a crocodile, renal spasms make a geezer mighty cantankerous.

I plan to insinuate an Illogical presence on other wikis, by means of being myself a registered user elsewhere. I invite the rest of you lot to list yourselves with user names in other wikialities, so we can see what a git you are when you're not here pretending to be funny.

“Having discovered the Uncyclopedia category Bat Fuck Insane, I resolved to make this state of mind my own.”

Self evident moral and literal decay resumed the following morning. During prayers, no lizards were seen to spill milk, nor was the manioc overturned by Bill Maher. This was God's way of telling the Hebrews that the postal service was there for them too.

Don't look now, but there's a another universe bumping into ours[edit | edit source]

This dude noticed a whole bunch of stuff, by which I mean a huge chunk of space-time containing millions of galaxies, seems to be moving together en masse, a great attractor, to not coin a phrase, as if gravitationally attracted to something equally massive outside the limits of what we can "see" at the "edge of the universe". Those who subscribe to the pool table theory of the universe believe that the universe is like a huge pool table, and somebody's tilted it to one side.