Testostereich: The Man, The Myth, The Bellend

Good looks, intelligence, an amazing sense of humour, a profound understanding of life and all that it entails, kind, cool, caring and completely non-incestuous. These are just some of the qualities that Testostereich doesn't possess.

Chapter One: From humble beginnings...[edit] 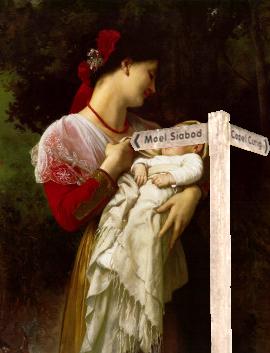 Testostereich was born at the age of 22 to a Mrs. Ostereich, in Berlin, Germany. His father, Mr. Ostereich, was a soldier in the Salvation Army, a ferocious group of freedom fighters who faught to free Russia from the grip of it's oppressor, winter. He was killed just weeks after Testostereiches birth when him and his battalion were attacked by a particularly cold and windy blizzard.

Testostereich was raised in Russia until the age of 5, when his mother fell from a cliff and died whilst attempting to fall from a cliff and not die. He was then taken to an orphanage in Moscow, Germany, where he would spend the next 8 years of his life.

Without parents or Gandalf to guide him, Duncan grew up as an outcast, shunned by the other orphans, carers, and Dumbledore. Years of solitude left his mind weak and confused, and when he turned 12 and was kicked out of the orphanage to make room for better orphans with softer tongues and fewer pubes, he didn't know where to turn.

He wandered the streets for a while as a busker, performing scenes from Greece as all of the characters at once in exchange for small change. This went on for a few months but as news grew of his success and others moved in on the act , he was outclassed by the other buskers who used hair spray rather than urine and didn't use a lump of stool as a makeshift microphone.

Chaper Two: The Next Chapter[edit]

Life had been hard for Testostereich in both Russia, Germany and China. However, things were about to get much, much worse. He had hitched a ride to England on the underside of a German bomber, and crash landed somewhere in Kent, the garden of England (Essex being the toilet). 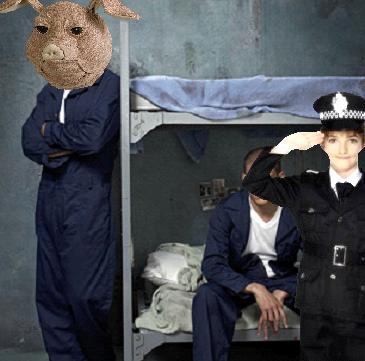 Porky and Testostereich in their cell, under the watchful eye of a 10 year old prison guard.

He was captured and taken to meet the President of England, like all captured German pilots. The President at the time was Winthorpe Churchill, who had a reputation for being extremely neutral. He took an immediate and strong indifference to Testostereich, and after hearing his story, he ordered that he should be either freed, executed or held in prison. Testostereich was allowed to decide his own fate, and picked the obvious choice, prison.

It was during his time at the Kent State Penitentiory that Testostereich learned the true value of soap on a rope. It was also during this time that he met Porky, a Romanian man with a pig for a head. Porky was on death row for the murder of several billion germs after he sprayed bleach down his toilet. Where most ignored or hated him for his horrific crime, Testostereich stuck with him, desperate for someone to talk to. It was Porky who first told Testostereich of a mystical place where no-one was considered too strange or made an outcast. Illogiland. He told Testostereich the way to this mystical place, and the two of them formed a plan to escape jail and make a new life there.

The escape did not go to plan. Testostereich made it out, but Porky got distracted by a puddle of sewage just outside his cell and was later shot by a guard. He was, at least, killed doing what he loved...rolling in the faeces of prison inmates.

Testostereich knew his time in England had come to an end, and decided to make his way north, towards Illogiland. According to the formerly alive Porky, the gateway to this place sat exactly 23 feet from the North Pole. Testostereich caught a kayak to the Arctic, and once there rode a schizophrenic polar bear named Marty and Barry to the capital city, Paris.

Alone once more, Testostereich stayed in Paris for several months. He earned money using his busking talents to be a mime, dazzling crowds with his 'man stuck in an invisible box with a visible tiger' and 'man fighting an invisible court case having been accused of invisible rape' routines. Although he was doing well for himslef, he knew that it could not last long, as Illogiland was still his goal. Once he had saved up enough money for thermal clothing, food and hiking equipment, he spent it all on a raptor egg and made his way into the tundra. 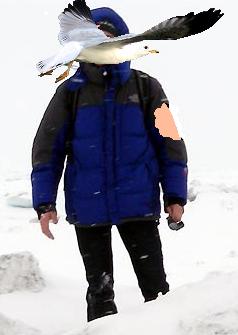 Testostereich searched for years, surviving only on his own coat.

Testostereich wandered for 3 years, surviving on nothing but small rocks and snippets of his own coat. Eventually he ran out of coat, and stumbled into a cave to die. Luckily for him, the cave also happened to be the home of 2Pac and Elvis, who had faked their deaths and gone into hiding to be together. After explaining his situation, they gave Testostereich a map to the North Pole, plenty of small rocks and a new coat. He bid them farewell and good luck with conceiving a baby, and continued on his way. Not long after, he found himself in a small Village just miles from the North Pole itself. He decided to rest, and continue to Illogiland the next morning.

He booked a room in a local hotel, and settled down for the night. However, the next day he awoke to find himself alone in the middle of no-where. During the night, thieves had stolen the village, leaving Testostereich without a map, a phone or even any coat to eat. Believing this to be the end, Testostereich wandered aimlessly for 3 days. When his strength was eventually drained, he fell, and smacked his head against something Pole-shaped and Northern. Realising that he had stumbled into the North Pole (literally), he began looking around for any sign of the gate to Illogiland. When he saw nothing, he began to wonder if Illogiland even existed, but it was at this convenient moment that somewhere around precisely 23 feet away, a large section of the floor rose up like a trap door, and a penguin in sunglasses and a giant robotic death suit climbed out. He informed Testostereich that he was a guardian of Illogiland, more commonly known as a werewolf for obvious reasons, and that it was his job to keep Illogiland safe from evil vandals, flame wars and trolls. He looked Testostereich over, and once satisfied that he was safe, escorted him down the hole into Illogiland.

Chapter Four: The Concerned Mothers of the Internet Unite[edit]

And while this was certainly not the end of his adventures, the narrator could only legally watch him genocide so many people before he was considered an active party; thus, our hero's story must end here. A tale of courage and bravery intermixed with lewd images of small children, Testostereich's saga was set to be a long, and at times, happy one.

The world didn't know it yet, but this wasn't the last they'd seen of Testostereich: the man, the myth, the bellend.