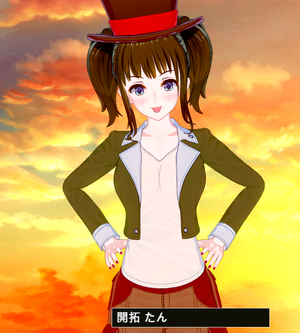 The Pioneer(ja:開拓者) is a guy who came from Usopedia, the Japanese encyclopedia of nonsense and humor. I guess he's a samurai or a ninja, because most Japanese are still belivers and learners of Bushi-do (the ways of samurais).

Since this guy is a ninja, he works on writing some articles in English (but sometimes in Engrish instead), giving some pieces of nonsense to Twoandtwoalwaysmakesafive to fight vandals, modifying articles about Japan and Japanese, and so on. With his ninja powers, I guess it's not difficult for him to act as an American or a British, if necessary.

His makimono, the script of secret ninja techs, is on his user's page.

His girl friend is, of course, Katana, the DC ninja girl. So cool, she is, isn't she? lol

With his ninja powers, now he is an admin and a bureaucrat not only on Japanese, but also on French, Dutch, and Norwegian Illogicopedia. His automated shuriken, aka the abuse filter, will powerfully fight against vandalism on these wikis.