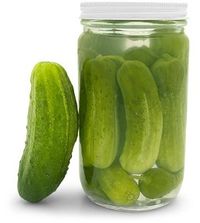 Illogicopedia's prestige writing competition, The Illogic Pickle, has returned at long last, having been lost down the back of the sofa for more than two years. Instead of flogging the thing on eBay, we decided to give you, the Illogicopedia users, a chance to win it once more!

As usual, the Pickle will be awarding in two categories:

You do not have to indicate which category you are submitting your article to; the judges are not (all) complete blooming idiots.

A.K.A. the blasted results.

Winner:
Diary of a Madman by The Bard
Runner up:
Slipping My Pickle In by HelloolleH

Winner:
Zimizmizm by Gruntled
Runner up:
An announcement for all you old fogies by Island Monkey 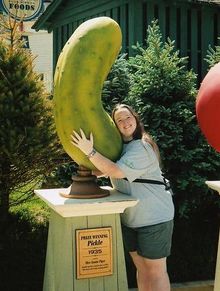 Not the actual Pickle, simply *a* pickle. And a pretty big one at that.

For a competition disrupted by chronic downtime and lack of an active userbase, ten entries was a decent turnout this time round. Following precedent set by the previous Pickle, we judged the articles in terms of inventiveness, aesthetic merit and of course humour (A.K.A humor). All entries had their positive points, but we felt the winners stood out as those into which the most care and attention had been invested... for the most part, anyway. The ones that didn't receive a 'prize' weren't necessarily any worse, certainly not in terms of concept, and with further work may possibly be worthy of feature. So don't lose heart (nobody really won a physical prize, remember), and get on down to VFF to vote on your favourites.

If you didn't win, remember to mail them a severed hand or something. Just make sure not to leave any traces of your own DNA.

What's in it for me?

The Pickle is a chance to get your article read by prominent members of the Illogicopedia community, rendering the usual apathy less potent.

But, but, there are so many good writers. I will never win!

Don't worry, winning isn't everything. Besides, your article will still have a chance to be featured via VFF. After the competition, admins will be putting the best articles to the public vote and, with a bit of luck, your entry might still appear on the front page.

Since the latest Roberto incident wiped out almost a week of editing time, would it be appropriate to add a few days to the deadline date? -- Hindleyak  Converse • ?blog • Click here! 10:29, 12 Jumbly 2011 (UTC)

Please do, especially as the site's still bloody sluggish. ~

I'm not sure if I can. Algorithm is my best article yet, and I need an idea.

My Collection of Living, Breathing Candles—-a vague description of five individual living candles, their daily activities, and repeated homicide charges; Bear barn blast battle—Rather self explanatory, but make sure to throw in something about little green hobbit people; Rubber band theory—If you're at all familiar with the string theory, this is an jiggly play on it. Everything is 10x more elastic in the universe. —rms talk 23:13, 28 Jumbly 2011 (UTC)

They used to be held twice a year, and it would be great if we could get back to that. I'd like to see another one in November. --The Bard of Illogicopedia

No, the contest closed at 00:00 UTC time, or about 1 hour and 30 minutes ago. See http://www.wolframalpha.com/input/?i=current%20utc%20time ~ The Bard of Illogicopedia

Is the Strangled Chicken being awarded this year? With his last-minute entry, I suspect that HelloolleH is vying to retain his title from 3.1, although his entry is much too good this time. ~ The Bard of Illogicopedia

Damn, if I'd known about that thing, I'd have put even less effort into mine than I did. Somehow. ~

I put as little effort into my entry as possible.
Really. I had a pre-made machine placed into my room, and the only effort I had to put into it was pushing the big blue button on it, which was the auto-write button. Made the whole article for me. Minimal effort. —rms talk 19:14, 2 Ergust 2011 (UTC)

Thinking takes considerable effort, in fact. It's like trying to move a walrus with a spoon. At least, that's my experience. Having thought about that to bring up the memory, I must now rest my spoon, though. Oof. ~

I once thought of a bucket fool of spoons, but that bucket was resting on a spoon in a an even larger bucket full of spoons. I sweated out two liters of water that day. —rms talk 05:45, 3 Ergust 2011 (UTC)

A couple of people have expressed their surprise at how low Uncle Bimbo ranked. So, let me give my take on why. It was a great, consistant article, and we did enjoy reading it. The problem came down to the categories, and in each category, other more directed articles sadly beat it to the post. Thats to say, Honourable mentions aren't necessarily any worse than the articles that won each category, it's just that we couldn't fit them anywhere specific. Maybe we need to address this with something like a "Best in show" or "somewhere in-between" category next time. What do you think? --Silent PenguinLeave Me Alone 13:04, 6 Ergust 2011 (UTC)

Bimbo could have easily got a runner-up prize, I think, but consensus was that HelloolleH's was marginally more daring, and yet *not* at the same time. It got us thinking, anyway. Was a very close call, but if it's any consolation, I see Uncle Bimbo as more of a front page feature than Slipping My Pickle In. The Pickle winners don't usually get an automatic front page place, remember, and with more of an emphasis on generating --for want of a better word-- featurable content, it's not necessarily a bad thing that it ranked lower. As a (UK-centric) real life example, the most entertaining Premier League football team last year were Arsenal, but they only finished fourth in the league and won no silverware whatsoever. However, I know I'd prefer to watch them over Man United any day. -- Hindleyak  Converse • ?blog • Click here! 13:24, 6 Ergust 2011 (UTC)

Now Seppy. You're not being very understanding. Try to see it from his perspective: 23 stars just isn't very much. In fact, it's barely more than the rest of the Pickle competitors combined. ;) ~ The Bard of Illogicopedia

I need someone to explain what' s going on. ~

You'll know better than I whether this Pickle leaves diminished activity in its wake... As a recent return after a 2-year vacation[1], my perspective is a bit limited, but here's what I liked:

Gentlemen, I thank you. Hope to see another one in the next 6 months.

Pretty sure the sophia server is in use at least for something here as well, mon. ~

Since it says the best articles will be put to public vote...