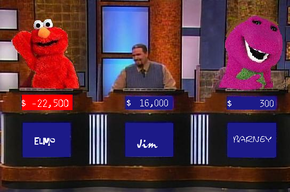 Yay it's the Barney.

Jeopardy is television trivia show with lots of weird questions about stuff that only those smart Harvard freaks know. Only old people like the show. It is very boring.

Having been hosted by some old guy, the show has almost no popularity. They needed a boost. So they phoned the Inspirgun people and ordered a gun. And then they got an idea.

They put famous celebrities on the show, like Elmo and Barney. Then they made a lot of money. But then Barney died so all of the toddlers who had become addicted to the show stopped watching it.

So then they brought in animals like cows and ducks and swans and capybaras and cool things like that.