From Illogicopedia
Jump to navigation Jump to search
This article is a stump. You can help it by grafting another tree or something onto it, using alchemy or magick to make it live again! 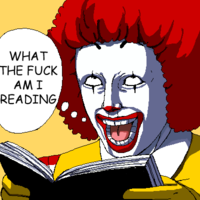 Invader Zim is troubled by Illogicopedia. No monkeys were harmed in the making of this picture.

Pizza for lunch? Not very imaginative, but alright. The clown that was not a clown strode towards the makeshift platform atop his favorite sanitary pedestal and deftly loaded his cigarette machine. Supper would be a kind of lumpy gravy, illegally seasoned and spotted. Of course, the pizza was eaten already, for he was a clown that was not a clown.

It all began innocently enough with a small scratching sound coming from the back of the airplane. At first we thought there was a bird, somehow trapped in the rear stowage compartment, but that idea was quickly dismissed using subterfuge and logic. The the sound of one of those old bicycle horns pierced the pseudo-silence. The pilot was surprised, but maintained a level heading. Non-mammalian crew had no idea what to expect, and so stood, weapons at the ready.

When the hatch popped, then hit the deck of the aircraft with a clang, a pastor handling snakes and sitting in a wheelbarrow placed McDonalds sandwich wrappers against his temples and screamed. The pilot kept his cool, but his navigator and devil prawn panicked, and hid in a cupboard for the rest of the mission.