“Just because I burst the judges ear drums with my poor quality yodelling they turned me into a duck! What a gip.”

~ Fonchezzz on the high standards of the hex factor 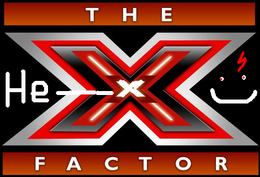 The Hex Factor is a popular yelling/yodelling/shouting/screaming/application of the weapon of sound above ground/table tennis?/decibel enheightening/voice raising contest set up by Harry Potter and his death eating chums. The idea came about when Ron complimented Hermione's shouting skills whilst the threesome trio ordered some first years to work faster as they hastily buried Dumbledore's body under the cover of darkness. Promptly being exposed by a police squadron on a random body check the three were placed in prison awaiting trial. After hours of fruitless escape attempts, including the corrosive application of tartar sauce to prison bars, they resorted to magic; turning Harry into a woman and teleporting them out of the prison.

They then got bored and in an effort to impress Some random gnome like people (who may or may not be involved with your impending demise) they decided to do something phallic and interesting. God saw how they weren't trying to impress him but instead some inferior creatures, and he got pretty pissed. He whined about it to Jesus who had some stern words with the group and forced them to work for ITV as a punishment. Of course they showed the interesting and phallic trick to their co-workers which angered God greatly and convinced him to begin the lengthy process of charging a lightning bolt.

The Hex Factor is Born, Again. (Born Again - or as Christians would say: saved)[edit]

They used their newly found phallic-shouting skills they became self-proclaimed hexperts and set up a show trying to recruit more ear exploders so that they could:

The Judges and Their 1337 Judging Skillzorz[edit]

Making Simon Cowell look like a little girl's blouse, the judges were notable for getting drunk and hexing contestants on a weekly basis. Occasionally Hermione would get aroused and explode, resulting in Steven Hawking becoming a much-loved and frequent stand-in judge. Unfortunately his voice machine often malfunctioned and let loose expletives and orgasm noises live on air; putting the judges' popularity in a safe deposit box atop the creaky ladder of popularity. Of course ITV being ITV couldn't stand having interesting programming on at prime time, and thus, the Hex Factor became unwatched early morning telly. 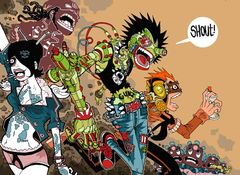 Your average contestants on the hex-factor

The contestants generally ranged from the "yay-high" to the those whose vision is constantly impeded by spiteful cloud movements. Probably the loudest and most successful contestant ever is Barry Scott who apparently shouted down all opposition before using his monotone marvel of a voice to paste Steven Hawk-wing all over the adjacent wall. The show enjoyed a lot of mute contestants as well as those who yell through voice machines; many of whom aren't ever seen again (but upon each mysterious disappearance Hermione seemed to get fatter and more naked).

After Microsoft Sam was killed by Hawking in a wheelchair related drive-by popularity started to decline for the show. By then everyone was deaf, knew how to do the interesting phallic trick and annoyed with the continuing monotony. Frustrated by the lack of popularity and desperate for the show to continue, the Three spraypainted the studio bright pink and made it compulsory for all contestants to remove their clothes before auditioning (increasing the number of naked contestants by 23%!) When a questionable dance move was used in a group audition the show was temporarily put on hiatus and relocated to the Playboy channel; Causing large-scale rioting and human-reproduction.

It was then that God managed to borrow Buddha's turbo-charged battery charger and completed the recharging of a lightning bolt. (It's pretty obvious what happened next and I'd like to not waste my last remaining fingernail writing the course of events, but the bespectacled scarred guy jabbing a wand in my back doesn't seem to agree with that brilliant notion). Anyway, the three-o got hit by the lightning bolt, which blew Hermione up, sizzled Ron into a deeper shade of red (if possible), and caused no harm whatsoever to Harry Potter; it even cleared up his acne and vanished his scar (as well as his credibility). Harry, remembering he was now a woman, swiftly married Ron and they lived not long after.