For those who can't handle the real truth, the spinners of fake truth at Wikipedia have a thoroughly boring article on Celebrity Deathmatch. 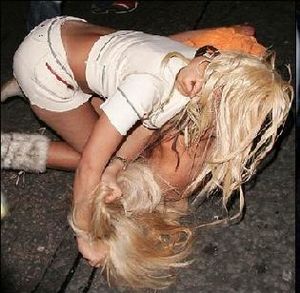 Martha Stewart and Zsa Zsa Gabor in a catfight over whose are real, or whose career is going downhill, or who Madonna prefers kissing, or something. Who can listen when a couple of high trash sex kittens are all over each other on the pavement? Did you know there are gentleman's clubs where they actually charge you for a show like this? In their defense, there's usually mud or Jell-o® included for the admission price.

Celebrity Deathmatch is a television series currently in development by The Fox Network, featuring real live celebrities mauling, clawing and bitch slapping the holy bejesii out of each other with hacksaws, wood chippers, and other assorted instruments of torture.

Lawyers respresenting The Fox Network would like to take this opportunity to remind you that Fox's offering bears no resemblance to the similarly-monkiered MTV program Celebrity Deathmatch which features completely fabricated claymation figures engaged in a sorely inferior level of conflict akin to the mating of The Three Stooges and Wallace & Gromit.

The Fox Network, the Emmy-winning, long-heralded champion of truly landbreaking television (which is in no way responsible for any perceived degradation of western values like those cited in the class action lawsuit current making its way through the US court system which is completely baseless and nothing to worry about and besides you missed the plaintiff deadline anyway) announced the development of the series last month after analysis of Nielsen ratings and an in-house telephone survey indicated that viewers were tiring of current reality TV offerings.

Bridgette Neilson , the nations leading T.V. polster, indicates that the "trapped-on-an-island" shows, "confined-to-a-house" shows, and "stuck-in-a-room-watching-bad-auditions" shows, though even among these, viewers identified some elements they enjoyed.

For example, audiences still craved situations eliciting disgust, horror, or both. Most popular by far were Flavor Flav and Dr. Sue Johannson's steamy interracial love romp on "The Surreal Life", and just about anything that happened on "My Big Fat Obnoxious Fiance".

Taking their cue from The National Enquirer and other print tabloids that profit by meeting our basic human need to see celebrities pushed from their high pedestals and into the mud, writers added a generous helping of WWE, and a dash of Faces of Death to produce what they hope is a winning formula. 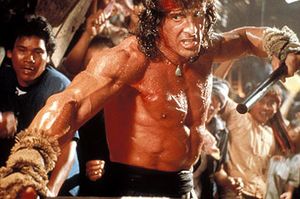 Steven Seagal, Rutger Hauer, Sylvester Stallone, Bruce Willis, and a cast of several, square off in a free-for-all cage match to determine who's the least feeble.

Contestants have their choice of two weapons, including canes, crutches, oxygen tanks, and walking frames. Or one, if two is too heavy. No wheelchairs or scooters permitted in the ring without a doctor's note. Colour commentary provided by Predator co-stars and alleged politicians Arnold 'The Governator' Schwarzenegger and Jesse 'The Governing Body' Ventura.

Late entrant Charles Bronson, thought to have died in August 2003, emailed the Fox Network to explain that his prolonged absence was due to litigation with his former management, and expressed his intent to mount a stunning upset against "the young whippersnappers".

~ Jaleel White on fatally maiming others

~ Adam Savage on The "Urkelator"

Mythbusters Adam Savage and Jamie Hyneman host a chemistry and Erector Set® extravaganza as some of Hollywood's most prolific nerds are sequestered inside an abandoned Kmart in a geek-eat-geek science fair to the death.

Rick Moranis, Robert Carradine, Anthony Michael Hall, Crispin Glover, Eugene Levy, Dustin Diamond, Jaleel White, and others are let loose to scrounge whatever leftover inventory they can in only 4 hours.

You'll giggle like a schoolgirl as Über-dorks bitch-slap and wedgie each other in an unbridled scavenger hunt of the plumbing and electronics aisles. After a thrilling 12 hour construction phase, it's robots vs. bombs vs. biological terror. In the end, there are broken alliances, broken bones, and broken glasses that even white tape can't repair—but only one nerd left standing.

"I enjoy being a room-mother at my children's elementary school!"

Britney: Hey. I thought you said this was a roller derby for charity? Mine are real!

Christina: No, they're not! Those big C's look totally unbelieveably large on you.

Britney: It's baby weight. I was pregnant! And my regular size is medium C. Besides, you're one to talk about fake ones.

Christina: Me? I'm not the one with entire websites dedicated to how fake their breasts are.

Britney: That's because yours are fake and everyone already knows it. Mystery solved!

Christina: They are not fake!

Britney: Are so! I googled you! You went from a small A to a large C, and didn't gain any weight!

Christina: Liar! Take that back, you bitch!!! (attacks)

Producer: Great! A three-way. You getting all this?

Camera 2: Got it. Looks like another Emmy from this angle.

At this point, the producers are quite confident that you are expressing your deep disgust in front of your friends and relatives, and publicly announcing your disinterest in watching even 30 seconds of this brand of soft-core reality-TV pseudo-porn...

And they hope there are enough televisions to go round as you each indulge yourselves privately.