it has no color Eeble. sonk. There is a dress hanging above the community hall in Nowherestown, New Hampshire. The dress is white and gold from the west side, but blue and black from the east. If you are a weasel, you will notice it. Because it has left the state of New Hampshire divided over how they see it, the U.S. government has issued a warrant for the burning of the dress to stop the Civil War-ish violence going on within the state.

But both sides knew that the government was going to interfere, so they decided to take it down, take a picture of it, and post it on Teh Plastic Cup to continue the debate!

Then it went to the birds and the birds decided to peck the dress to death. It can seemingly change colour, so they pecked it until it was a strand of dress. Because of the dress, we will not be watching weasels anymore. May they mink in peace.

Now it is over, neither side has conceded defeat. This being despite we know the truth.

For those who can't handle the real truth, the spinners of fake truth at Wikipedia have a thoroughly boring article on The Dress. 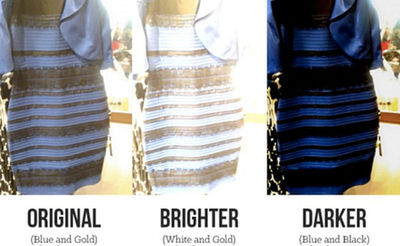